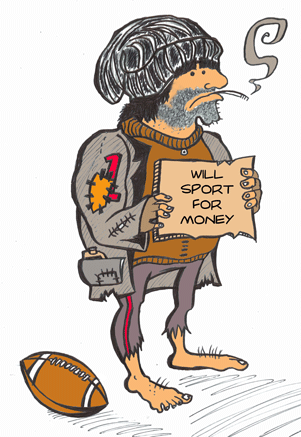 When I learned that Bison Sports is dismayed that their best-attended football games draw a mere quarter of the student body out to Investors Group Field, it brought tears to my eyes. The sky became suddenly overcast, and out of nowhere I heard the plaintive strains of the slow movement from Tchaikovsky’s violin concerto ringing out from the world’s tiniest violin.

In an article in the Sept. 30 issue of the Manitoban, Mike Still wrote, “while Bison Sports is working hard to create an optimal fan experience, it’s still up to the students and fans to do their part and actually show up.”

He expressed a similar view in an editorial back in March, describing attendance at Bisons home games as “abysmal” and “pathetic.”

These articles discuss the indisputable fact that supportive fans can improve a football team’s performance on the field. But they go one step farther and intimate that U of M students have a responsibility to attend football games and are somehow letting the school down if they don’t.

I’m not a sports fan. Ordinarily I don’t begrudge other people their sports fandom so long as they keep it away from me. But the immortal rind it takes to publicly lament the attendance levels and suggest that University of Manitoba students have some kind of obligation to show up at Bisons games – well, that makes me mad.

Manitoba is behind the curve, but it’s by a matter of hundreds, not thousands. Regardless of the size of the stadium, expecting a five-digit turnout on a regular basis is absurdly unrealistic. CIS football only occasionally cracks five-digit attendance – it has done so only four times this season, twice at Laval and twice at Western.

This is not to say that Bison Sports shouldn’t press to improve attendance, but it’s certainly not true that Manitoba fans are uniquely unsupportive of their team. Guilt tactics are hardly warranted.

Being a student these days is not easy. Unless you’re extremely well-off, you have to work, and in many cases you have to work more than one job. If you take your studies seriously, then coursework and reading will absorb a great deal of your time. Then there are extracurricular activities, some of which (depending on your program) are nominally optional but in practice required. I’m told many people enjoy going out with their friends as well.

There just isn’t time for many students to attend football games even if they wanted to. It’s nothing short of cruel to suggest they are in some way letting somebody down by prioritizing school, work, and other responsibilities over football – which, let’s not forget, is not the main purpose of a university.

But there are also many people that aren’t interested in football at all and would never attend a game even if you paid them.

Though I doubt athletes would like being compared to musical performers, I think the analogy holds. It’s not actually necessary for the U of M to have a football team. The Bisons do not play football because we need them to. They play football for their own benefit as athletes and as entertainment for the fans. In an important sense, this makes them performers, and some of the same rules of etiquette must apply.

As a musician, it strikes me as unspeakably gauche to complain publicly about poor attendance – especially when your definition of “poor attendance” is still usually greater than 1,000 people. Even worse is to deny the autonomy of the audience to choose what they do and do not wish to see.

We’re taught that nobody owes you an audience. I happen to think that a symphony concert is a more worthwhile place to spend an evening than a football game, but even I can’t argue with an audience’s choices one way or the other. In the words of the great sportsman Yogi Berra, “if they don’t want to come out, nobody’s gonna stop ’em.”

If people know about your concert and consider it worth their time to attend, they will. All you can do is promote the concert as heavily as possible, play as well as possible, and hope for the best. I don’t see how the matter could be any different for athletes and football games.

Musicians are no strangers to the “home field advantage.” Of course it is always better to be playing for a large and visibly excited audience so you can feed reciprocally off the energy in the room. Playing for a small or unsympathetic audience is difficult and unpleasant, but sometimes you have to do it.

You don’t always get the audience you’d like. As a performer, if the excitement isn’t there, it’s your job to create it. You have to do this for whoever shows up, whether it’s 30,000 people or only three.

The student experience amid a pandemic