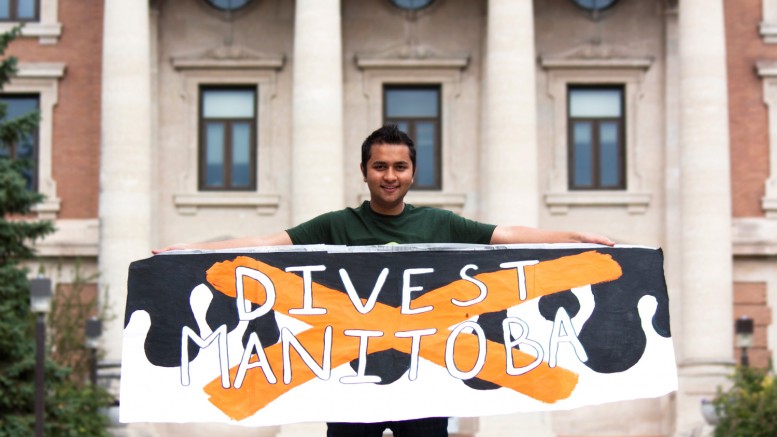 Following the lead of universities, pension funds, and philanthropic foundations worldwide, the University of Manitoba Students’ Union (UMSU) is building a movement to push the university to divest its holdings from the fossil fuel industry.

Acting on a motion passed by UMSU council in the spring, Astitwa Thapa, vice-president external for UMSU, has been spreading the word, collecting signatures, and meeting with other student and faculty associations.

He seeks to build a support base to compel the university to eliminate its $64-million interest in the oil, gas, and coal sectors.

In a resolution passed with near-unanimous support at its April 6 meeting, the union formally endorsed the campaign led by the Divest Manitoba student group and Fossil Free Canada. Citing environmental concerns, the resolution calls on the association to lobby the University of Manitoba Board of Governors to divest university funds from public equity and corporate bonds that include fossil fuels within five years.

As of June 2015, the University Investment Trust was valued at $632 million, with slightly more than 10 per cent invested in fossil fuel-linked industries.

John Danakas, executive director of public affairs at the U of M, told the Manitoban that “the University of Manitoba is recognized internationally for its leadership in climate change research” and noted the school has hosted Søren Rysgaard, the Canada Excellence Research Chair in Arctic Geomicrobiology and Climate Change, since 2010.

Alongside Rysgaard, more than 100 researchers and graduate students studying out of the Clayton H. Riddell faculty of environment, earth, and resources are probing the causes and consequences of global warming.

Thapa said the university needs to set an example in the community by moving its financial portfolio in line with its environmental accomplishments elsewhere.

“If we are calling ourselves trailblazers and defenders, then let’s act like one,” he said.

“Let’s be a role model in our society […] The University of Manitoba prides itself in being a leader in the 21st century – then be a leader by divesting from fossil fuels.”

On top of the investment trust, a pension plan valued at $1.126 billion has a nearly 6.5-per cent – or $73-million – stake in fossil-fuel related industries.

While a separate entity, the plan – administered on behalf of members of the University of Manitoba Faculty Association, the Canadian Union of Public Employees local 3909, the Association of Employees Supporting Educational Services, and non-unionized staff – is controlled by a pension committee that reports to the board of governors.

Shirley Thompson, an associate professor with the U of M’s Natural Resources Institute, signed Thapa’s petition and said faculty can use the fund to make a powerful statement.

Citing previous divestment campaigns moving funds away from companies doing business with the South African apartheid regime in the 1970s and 1980s and the tobacco industry in the 1990s, Thompson said the money can yield positive social returns if it’s funnelled into renewable and sustainable energy solutions.

“Do we want to continue on that [fossil fuel] path or do we want to find a new path?” she said.

“No, we don’t want to give more power to oil companies and tweak their system – we want to change the path.”

Opinion is varied on the consequences and effectiveness of divestment, with critics claiming the largely symbolic move will do little to affect consumer demand and rising global temperatures while ultimately hurting the bottom line of university endowments.

Nearly a year ago, Dalhousie University’s board of governors voted against moving about $20 million out of the fossil fuel sector. George McLellan, head of the board’s investment committee, told CBC that divesting would hurt the university in the long run.

“If we turn our back on a number of companies, why would they put money in here?” he said.

Despite the resistance, campaigns have sprouted at more than 20 universities across Canada but so far only Concordia University in Montreal has taken steps away from fossil fuel industries with a $5-million sustainable investment fund dedicated to divestment and social and ethical investing.

Students at the University of Winnipeg began a divestment campaign in January, leading the university’s administration to commit to a risk assessment study determining the impact of moving six per cent – nearly $3.54 million – of a $59 million endowment fund away from fossil fuels.

Peyton Veitch, president of the University of Winnipeg Students’ Association and a student representative on the committee struck to undertake the assessment, said the campaign has garnered support from various student and faculty groups.

“What students are saying is that divestment not only makes sense from a moral and ethical and environmental point of view,” he said. “But a lot of financial experts would maintain that it makes good fiscal sense as well.”

The report, titled “Beyond Fossil Fuels: The Investment Case for Fossil Fuel Divestment” analyzed returns over five years from April 2008 to April 2013 and found a fossil-free portfolio would have improved returns over the industry analyst MSCI world index by almost 0.5 per cent.

However, a study commissioned by the Independent Petroleum Association of America released at the beginning of September claims divestment would result in long-term investment shortfalls.

Studying the endowment values of five American universities – Harvard, Yale, MIT, Columbia, and New York University – the report said “a reduction in endowment fund returns as a consequence of divestment would have material impacts on an endowment’s ability to fund a university’s key institutional goals.”

Considering a 50-year history of returns, the study concluded a divested portfolio averaged across the five universities would have yielded 0.23 per cent lower returns. However, critics of the study say the half-century timeline fails to account for an increase in cost in oil production in the last decade.

According to a report measuring the growth of the movement released just last week by Arabella Advisors, more than 436 institutions and more than 2,000 individuals in 43 countries have committed to divest $2.6 trillion in assets from fossil fuel companies.

The second annual edition of this report outlined a fifty-fold increase in total divestment commitment. In 2014, the Arabella Advisors reported 181 institutions and 656 individuals had committed to the cause, representing over $50 billion.

Close down to Hoe Down week