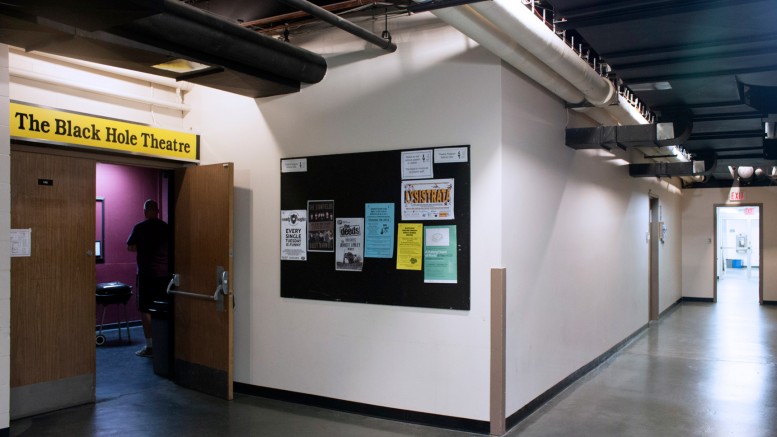 Nestled in an alcove of an obscure hallway behind the stairs in the basement of University College, you can find one of the University of Manitoba’s flagship performing arts venues. What is now the Black Hole Theatre used to be a floor hockey room, and this fact is the key to making sense of its design.

Though at 120 seats it is larger than it looks, the theatre gets cramped when it’s even partially full. The stage is a thrust, an unconventional layout with seats on three sides of a rectangular floor space and a backstage area on the fourth side.

“You can learn skills here that you may never use again,” said Tim Gray, an alumnus of the U of M theatre program and a member of the comedy troupe H.U.N.K.S.

The room is wider than it is long. The ceiling is low. The front entrance is not particularly inviting to members of the public.

In short, the Black Hole Theatre is a quirky little performance hall with decades of history and perhaps too much personality. Watching a play in the theatre is like being let in on a secret. But soon you won’t be seeing many shows there at all.

Possibly as early as this coming January, the Black Hole Theatre Company will be moving to a new performance space in the Taché Hall arts complex. The company is saying goodbye to its current venue in style, bringing together students and alumni for a production of Aristophanes’s Lysistrata, which was profiled in the Sept. 16 issue of the Manitoban.

With tickets at $50 a pop, the production is intended to raise money to fund the ongoing construction of the new Conklin Hall Theatre. The current Black Hole Theatre will become a rehearsal hall for the theatre program.

For people involved in the program, it’s a bittersweet goodbye. Chris Johnson, a professor in the department of English, film, and theatre and the director of the production of Lysistrata, had plenty of negative things to say about the current space.

When asked what is exciting about moving to the new Conklin Hall Theatre, Johnson laughed and said, “air.”

“This place [the Black Hole Theatre] is not well ventilated. With 120 people and all those lighting instruments it gets pretty warm in here. The new theatre’s comfortable. It’ll be a better audience experience.”

A better public-facing entrance is also an attraction for Johnson. “We’ve got a real lobby instead of a hallway with pipes running down the middle,” he said.

Another limitation of the current space is the low ceiling height, which limits the construction of sets and makes lighting difficult.

“This is only 12 feet,” said Johnson. “You can’t light properly at 12 feet, or you can do so with great difficulty. It drives directors crazy because we can’t get off the deck. When you’re working with actors, you can’t get any height in the sets.”

“The intimacy of the old space is also pretty special. There aren’t many theatres where the audience is so close to the performers, where every little movement of the face registers, or where you get splashed by the blood in Titus Andronicus.”

The new theatre will have a height of 40 feet, according to Johnson. The seating will also be retractable, meaning that capacity could vary from 130 to 150.

Aside from the theatre itself, there are some other new developments for the theatre program in the works at Taché Hall.

“We’re replacing the scene shop we’ve got here, which is not very good,” said Johnson. “It’s under a lecture hall, which means we can’t use it when there are lectures on. And there’s a prop shop and a costume shop. Again, proper shops with lots of headroom, big enough to build a set to go into the new theatre. All of this is glorious luxury for us.”

The Conklin Hall Theatre is being funded in part by a donation from the family of John James Conklin, a U of M alumnus who worked as a journalist and theatre critic for the Manitoba Free Press (later Winnipeg Free Press) for over 50 years. His son Elmer D. Conklin made the $1 million donation in 1989, and since then it has grown to $1.5 million. The total cost for the Conklin Hall Theatre will be $7 million.

The Black Hole Theatre’s production of Lysistrata will take place from Sept. 28 to Oct. 3 at 8 p.m. (8:30 on Oct. 3) in the Black Hole Theatre in the lower level of Unviersity College. Tickets are $50 and a charitable tax receipt will be issued for a portion of the ticket price.

A push here and a door slam there

A blend of science, art and activism