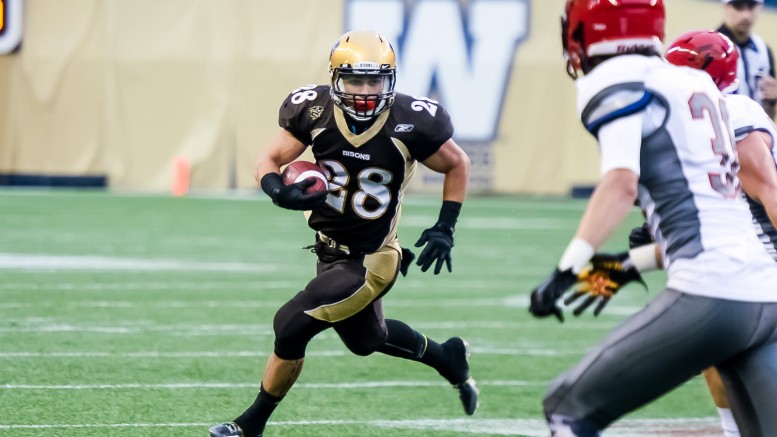 At the start of the 2015 CIS football season, it appeared that the Saskatchewan Huskies boasted the most diverse backfield, with Tyler Chow, Jarvis James, and Shane Buchanan. Three games into the current campaign, however, it’s become evident that the Manitoba Bisons have earned that distinction.

Veteran running back Alex Christie and newcomers Jamel Lyles and Cameron Fox have quickly become a dangerous force for the opposition, racking up a combined 1,090 all-purpose yards after week three.

It’s a group with varying running styles, effectively keeping other defences on their toes with every play. Christie, at five-foot-nine and 195 pounds, is the agile, elusive one of the group, while Lyles, at 205, and Fox, at 220, are both power backs who can move in space.

While the trio bring different elements to the Bison backfield, it’s their varying backstories that are even more intriguing.

Lyles, a British Columbia native, was one of the most highly touted recruits coming out of high school two years ago, after accumulating over 3,000 combined rushing yards in his grade 11 and 12 seasons at Lord Tweedsmuir Secondary School in Surrey.

Lyles decided to take the following fall off in order to pursue a few NCAA Division 1 offers from schools such as Montana, Wyoming, and Nevada-Las Vegas. That route ultimately didn’t work out, but Lyles was just as happy to commit to Manitoba for the 2015 season.

“[Division 1] was definitely the goal. I’m not going to say that was the main road I wanted to go to, because the opportunity I had here was also great,” Lyles said. “When I came on a recruiting visit [to Manitoba], the players were awesome, it felt great right when I got here, and it was just like family right off the bat.”

Fox, a talented prospect out of Calgary, took a bit of a different route in his football journey. He was originally recruited by Regina to play linebacker after an impressive high school career at Father Lacombe High School, but ultimately didn’t go.

Fox then spent two years working before returning to the sport in 2012 with the CJFL’s Calgary Colts. He played there for three seasons, and was given the honour of practising with the CFL’s Calgary Stampeders for the entire 2014 season.

Fox impressed with the Stamps, and actually had the chance to sign with them, but instead chose to pursue his CIS dreams, coming to Manitoba in order to gain valuable knowledge and hone his game.

“Just talking with other guys that kind of went that same route, they said they wished they would’ve played CIS football too, to try and get that experience,” Fox said.

Christie, a Winnipeg native entering his third year of eligibility with the herd, played the majority of his high school football in Ontario, moving there at age 14 due to his father’s job in the RCMP. He had offers from a number of Ontario universities after high school, but chose to come back to his hometown.

Part of his decision was due to the talented core of running backs Manitoba already had at the time, in current CFLers Anthony Coombs, Nic Demski, and Kienan LaFrance.

“My thought process behind it was, why not learn from some of the great players in the program?” Christie said.

Interestingly, it’s now Christie who’s assumed the leadership role that Coombs, Demski, and LaFrance once had. That’s something that Lyles and Fox both appreciate.

“When I came to spring camp, Christie pretty much was like, ‘any questions, just ask,’” Fox said. “A lot of things he’d simplify it for us too. That’s definitely the impression I got from Christie coming in, he’s definitely a team guy.”

“There’s a brain to the three headed monster, and [Christie’s] it,” Lyles said.

While all three players have had success in the past, at no point did any of the running backs feel the need to one-up any of their teammates in order to gain more reps – noted particularly by Christie, the senior member of the group.

“If they’re better than me, they deserve to be on the field,” Christie said. “I don’t care, because they’re going to make us win and that’s really what football’s all about, is winning.”

As the stats show, each player has made an impact so far this season, and as the campaign continues all three players will surely continue to make their names known, both individually and as a unit. Gains but no payoff for Manitoba Bisons in playoff rematch