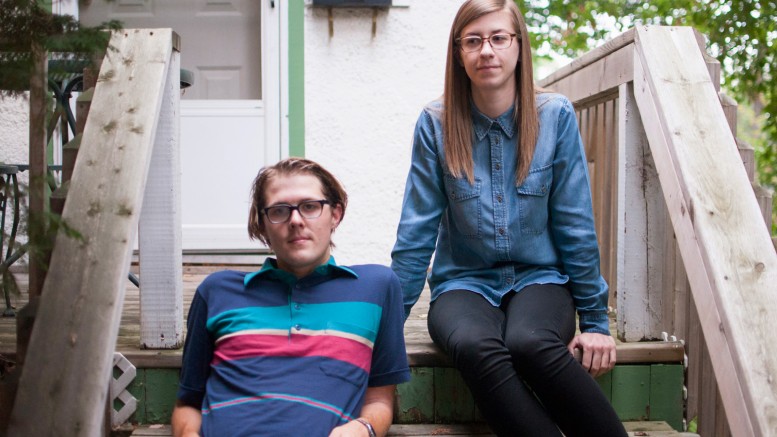 Dream City is the follow-up to the band’s 2011 release Firecracker/Cloudglow and sounds like a perfectly logical progression from its predecessor.

The opening track and lead single of the album “Can’t Sleep” provides no elaborate introduction to the album; it simply crashes in with a jangly, reverb-drenched guitar keeping time to a driving, simplistic drumbeat. Vocalist/drummer/guitarist Alannah Walker’s sharp, nasally, quirky, and charming vocals begin the first verse shortly after.

The rest of the album continues in the same vein, for the most part. Almost every track is under three minutes in length and nearly all of them showcase the group’s uniquely refined blend of jangly pop melodies and blaring, discordant indie-rock guitar tone. “Totally Crushed” – sung by other vocalist/guitarist/drummer Cole Woods – exemplifies this type of songwriting with particular gusto, sounding for all the world like Japandroids had cleaned up their guitar sound and added in some Pavement-esque melodicism to their vocal arrangements.

Walker attributes the formation of Cannon Bros. to her and Woods’ acquisition of drum kits, which prompted the two to start playing songs together. The band began out of a casual and mutual appreciation for music and appears to have continued to exist in such a manner, with both Walker and Woods switching between the roles of drummer, guitarist, and vocalist as they see fit.

“The way we wrote and put the songs together is pretty much exactly the same,” Walker said of the new album.

“We wanted all those songs on there, and they’re not very long […] To me, it doesn’t feel super long. If we had gone with like 12 and they were the length that they are, it would have been a pretty short album,” Walker told the Manitoban.

Walker also addressed the band’s four-year hiatus between releases, closing the interview reinforcing her excitement at its imminent release.

“We started recording this album maybe two years ago, with the intention of finishing it more quickly than we did. It didn’t take us long to finish actually recording it, but the lyrics weren’t finalized and so we had to go back and do that […] I would say the main reason is, probably, after we finished touring I wanted to finish my degree. That became my number-one priority,” said Walker.

“We’re really excited to release this album, and I know it’s been a long time coming. We just hope that people enjoy it.”

Sc Mira releases single “On my Own”

‘One man’s vulgarity is another man’s lyric’

A lesson China should learn