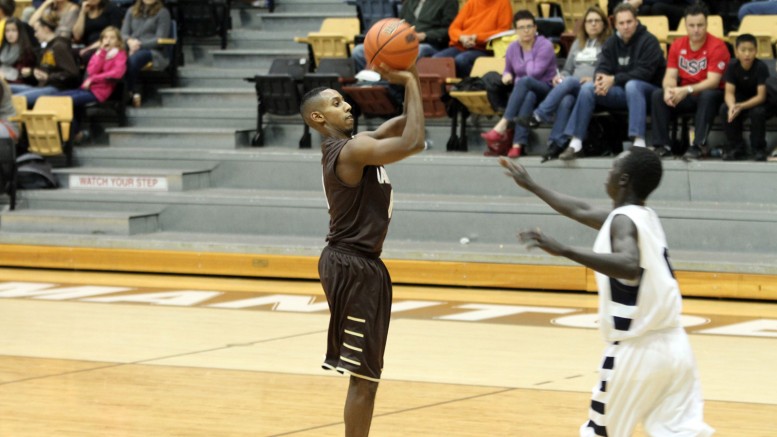 Ali, a University of Manitoba Bisons men’s basketball player, was doing a normal transition drill in practice. “I was just attacking the rim, same move I’ve done a million times,” he said.

“I think I got myself caught a little behind the backboard, and went a bit too far and tried to cut back. It was a normal basketball play, happens all the time. All of a sudden, boom, knee goes.”

Ali had torn his ACL. Up until that day, he had never had a knee problem in his career. The timing couldn’t have been any worse, as he was named a co-captain for the second consecutive year in 2014-15, and was just putting the final touches into what was supposed to be a memorable final year with the herd when the injury occurred.

At first, Ali was in denial, but that quickly turned to frustration when he realized his career might be over. “It’s just one of those things where it’s like, fifth year, is this really happening right now of all times,” Ali said.

Since Ali had already graduated from the U of M, and was coming back just to play his final year with the Bisons, he chose to try and rehabilitate the knee and get on the court for the 2014-15 season.

Ali worked hard during his rehab, pushing himself for six weeks. He sat out all of the pre-season before making his return to the court for the opening series of the year against Trinity Western.

Ali would log a total of 18 minutes that weekend, as well as the next, against Regina. His knee, while still a bit wonky, was improving.

Friday, Nov. 14, against the Brandon Bobcats was an entirely different story.

“It was during that fifth game, right at my first shift, it came out bad,” Ali said. “It was way different than normally. That one rattled the cage, I was like, ‘oh shoot, this is bad.’”

Ali would have surgery in January 2015, and at that point he didn’t know if he was going to play again. He would meet with Dean Kriellaars, an associate professor in the U of M’s department of physical therapy, to weigh the options.

For the second time in four months, Ali began the rehabilitation process, this time post-surgery. He improved drastically in a short amount of time and was quick to credit Kriellaars’s program, which was intensive but worked. Three days after surgery, Ali was already walking without crutches.

“Dean is the best at what he does, but it’s because he works you into the ground,” Ali said. “It was 12 sessions a week for seven months, essentially.”

It was a tough summer, with rehabilitation three times a day, but Ali fought through. All he had to do now was wait.

Big decisions to make
In mid-May, two important events occurred in Ali’s life. The first was being informed that he got his fifth year back due to the medical redshirt rule.

A player who played over five games of the regular season wouldn’t be eligible for medical redshirt status, making the timing of Ali’s setback a fortunate one in that regard. If his re-injury had occurred a day later, then he may not have had a chance of stepping back on the court in 2015-16.

“If I had played another game, then I think my appeal process would have been an actual process, but because I didn’t actually break any of the rules, or pass that limit, then it was okay,” Ali said.

About a week after hearing the positive news, Ali found out he got early acceptance into medical school at the U of M. While he was excited, he also knew he had a big decision to make. His knee wasn’t at 100 per cent yet, and it would be tough to try and balance athletics with medical school.

About a month before med school started, Ali got another blessing in disguise.

He was asked to speak at the Winnipeg Boys and Girls Club’s annual general meeting, where he met a man named John Wade, a former dean of the U of M’s college of medicine.

A little while later the two met up, and Wade helped Ali in making his decision, which was ultimately to try to defer his acceptance to medical school in order to focus solely on basketball.

Wade introduced Ali to Bruce Martin, director of postgraduate medical education at the U of M, who was able to help him make arrangements to defer.

“We talked about it, and he was awesome, such a nice guy,” Ali said. “He presented me with my options of deferring, and at that point, I kind of knew that I wanted to be playing again.”

Ali was reserved a spot in next year’s class, and will start medical school in August 2016.

Fate dealt Ali a cruel hand, but patience and hard work slowly turned his negatives into positives. His knee feels good, he has his educational future figured out, and now he can focus solely on helping win a Canada West basketball banner for Manitoba.

“It was literally a year ago last week that I got hurt, and I had no clue that this was how it was going to go,” Ali said. “It’s crazy how things change fast.”