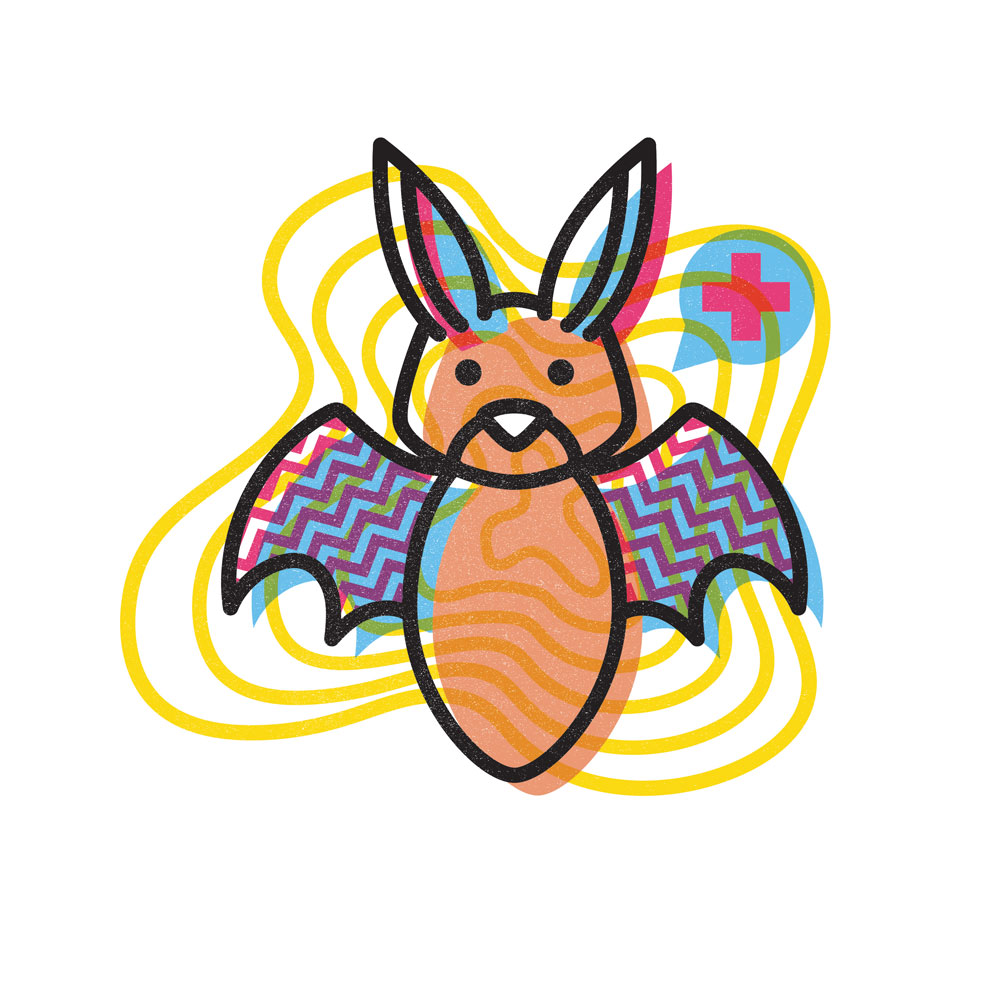 Results of recent laboratory and field work show that a soil bacterium can inhibit the growth of a fungus which causes a deadly and devastating disease in bats.

White-nose syndrome is an infectious disease caused by the fungus Pseudogymnoascus destructans. The disease is named after the white fungal growth which appears on the muzzle of infected bats. The disease has decimated North American populations in recent years.

In 2012, researchers from Georgia State University first noted that the bacterium Rhodococcus rhodochrous inhibits the growth of the white-nose fungus in the lab. This bacterium has recently shown promise in protecting wild bats from acquiring this disease as well.

The infectious fungus first poked its conidia in caves on the east coast about five years ago, and has since rapidly spread.

Unfortunately, it seems as though it may be too late to save the east coast bat population, but there is hope that western populations can benefit from R. rhodochrous protection.

P. destructans prefers colder environments like those found in areas where bats hibernate in the winter.

The fungus colonizes the skin and wreaks havoc because the immune system of a hibernating bat is nearly dormant.The infection eventually causes death by dehydration and the depletion of caloric fat stores. Toxoplasma gondii is my favourite infectious agent. This is because this cat-dwelling parasite has the ability to change minds.

The definitive host of T. gondii is the domestic cat. Cats typically shed these parasitic protozoans in their feces, and from there they are passed further to other individuals.

If these parasites infect rodents like rats, something interesting happens: the rats become less scared of our feline friends. By altering the rats’ behaviour, the parasite can be reunited with the host in which it can reproduce through the form of a self-sacrificed meal.

Since humans domesticated cats long ago, it’s no surprise that the parasite is very common in our populations. It has been shown that T. gondii infection in humans is associated with slight behavioural changes like increased aggression and impulsivity, behavioural changes similar to those seen in rats.

Researchers have been investigating the relationship between T. gondii infections and schizophrenia for decades. A recently published paper analyzed a previously unpublished survey from the 1980s consisting of data collected about cat ownership and mental illness, including schizophrenia.

The results of the analysis were similar to a 1995 study and a 1997 follow-up study which both show an apparent association between cat ownership early in life and the development of schizophrenia later on. The increased risk was found to be about two times greater in this recent study.

The researchers urge others to use these findings as the basis for experiments into the causal relationship between Toxoplasma infections and schizophrenia.

There are some hypotheses which attempt to explain the relationship between the parasite and schizophrenia. One such hypothesis includes parasite-production of the neurotransmitter dopamine, increased levels of which is thought to contribute to the onset of schizophrenia. Researchers have discovered a new way in which certain marine animals can carry out self-repair. For humans, losing a limb is permanent, with no chance of regeneration. When it comes to non-human animals, self-repair is a much more common and diverse happening, especially in marine life. Some animals, like certain starfish, can easily regenerate lost limbs.

The newly discovered process, called symmetrization, involves the restoration of an ordered body plan after disruption to it caused by damage.

The studies were done on ephyra, juvenile individuals of Aurelia aurita also known as moon jellyfish. These ephyra have a body plan known as radial symmetry – the same kind that a pinwheel or a sunflower has – consisting of a centre disc with eight arms projecting from it.

The researchers carried out amputations of the ephyra’s arms and observed how they reacted to this dismemberment.

Instead of regenerating the arms like a starfish might, the jellyfish instead reorganized their remaining arms in a way that restored their radial symmetry.

This limb reorganization can quickly occur in just a couple of days. Interestingly, jellyfish that went on to reorganize themselves in a proper way were able to fully mature into adults.

The restoration of a symmetrical body plan is essential for the survival of the jellyfish. Their locomotion depends on precise flapping of their evenly distributed and symmetrical arms. If they can’t move, they can’t eat. So it goes.

Predators often cause this kind of dismemberment. Sea turtles are particularly good at munching on jellyfish – an average adult eats more than 200 jellies a day.

The science of LSD