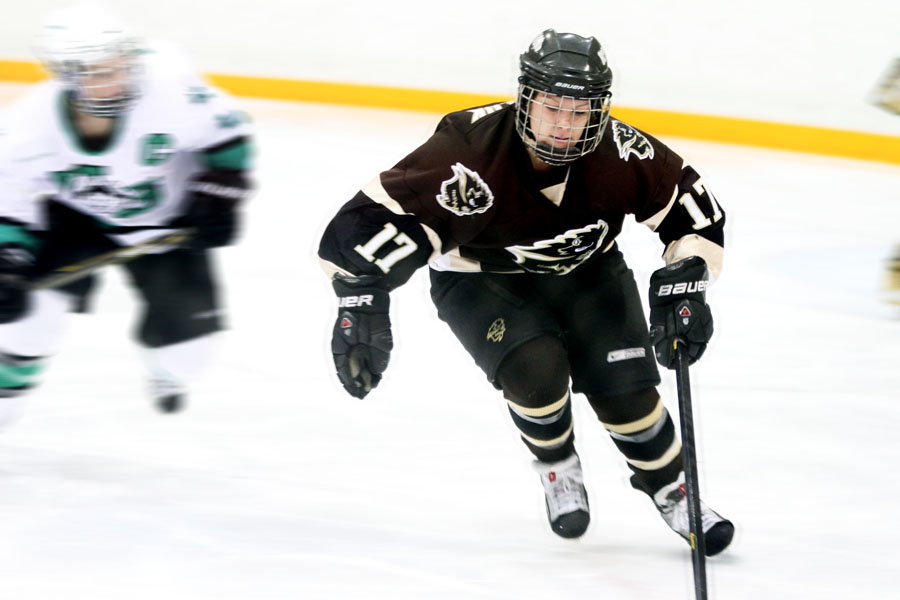 The University of Manitoba Bison women’s hockey team proved that age is just a number this past weekend, as their rookie-fuelled roster took down the visiting Regina Cougars two games to one at the Wayne Fleming Arena, in the opening round of the Canada West conference playoffs.

It was the ultimate act of revenge for the Bisons, who were upset by the very same team at home in last year’s quarter-final matchup.

Manitoba entered the playoffs with the number three seed, after finishing the regular season with 54 points. Their opponents from Regina finished sixth, with just 38 points; however, the three-game contest was highly competitive.

Manitoba grabbed game one, with a 4-1 victory, in which they basically dictated the pace start to finish. The Cougars finished with 10 total penalty minutes, resulting in their downfall, as they were never able to grab consistent momentum.

The herd outshot Regina in every period, and also cashed in on two of their man-advantages, with goals coming from Michelle Pawluk and captain Maggie Litchfield-Medd on the power play. Courtlyn Oswald and Lauryn Keen also scored for Manitoba. Kylie Gavelin notched the Cougars’ only goal of game one.

Bison head coach Jon Rempel, fresh off being named 2014-15 Canada West Coach of the Year, made sure to instill the same level of intensity in his team from what they demonstrated in a strong regular season.

“Just before the game I told them not to change too much,” Rempel said. “Your team’s personality is what it is, and you’ve got to play that way the whole year – you don’t change for the playoffs.”

Gavelin would come up big the very next night, notching a hat trick to lead the way for Regina, who pulled off a 4-3 double overtime victory, taking the series to a deciding third game.

The Bisons led the game 1-0 after the first intermission, and 2-1 after the second; the third period and extra session, though, were where Gavelin took over, recording all three of her goals in that span.

Rookie sensation Alanna Sharman would get the scoring started in this one, tallying her first goal of the playoffs at 17:11 on the power play, which was the lone goal in the opening 20 minutes.

Carleen Meszaros answered back in the second for Regina, scoring a power play goal of her own, at 2:23. Keen would net her second of the series with the extra attacker at 13:24, and Regina found their season pushed to the brink, down 2-1 heading into the third.

Gavelin sparked the troops, however, scoring just a minute in to yet again tie things up. Alana Serhan would restore the Bisons’ lead at 11:52 on the power play, but Gavelin made sure that momentum was short-lived, tying things up at three just under two minutes later.

It took a second set of overtime for Regina to pull out the come-from-behind victory, but they eventually got it done, as Gavelin cashed in on a wrap-around a minute in, sending both teams to the brink for Sunday’s final game.

It was fitting that Sunday’s deciding game would also take more than 60 minutes to find a winner, with both squads upping the compete level.

Oswald would be the hero for Manitoba, potting the game and series winner at 6:06 of the extra session, en route to a 3-2 Bison victory. First-line sensations Litchfield-Medd and Sharman would also provide goals for Manitoba, who will now move on to play the UBC Thunderbirds on the road this coming weekend in one of two conference semifinals.