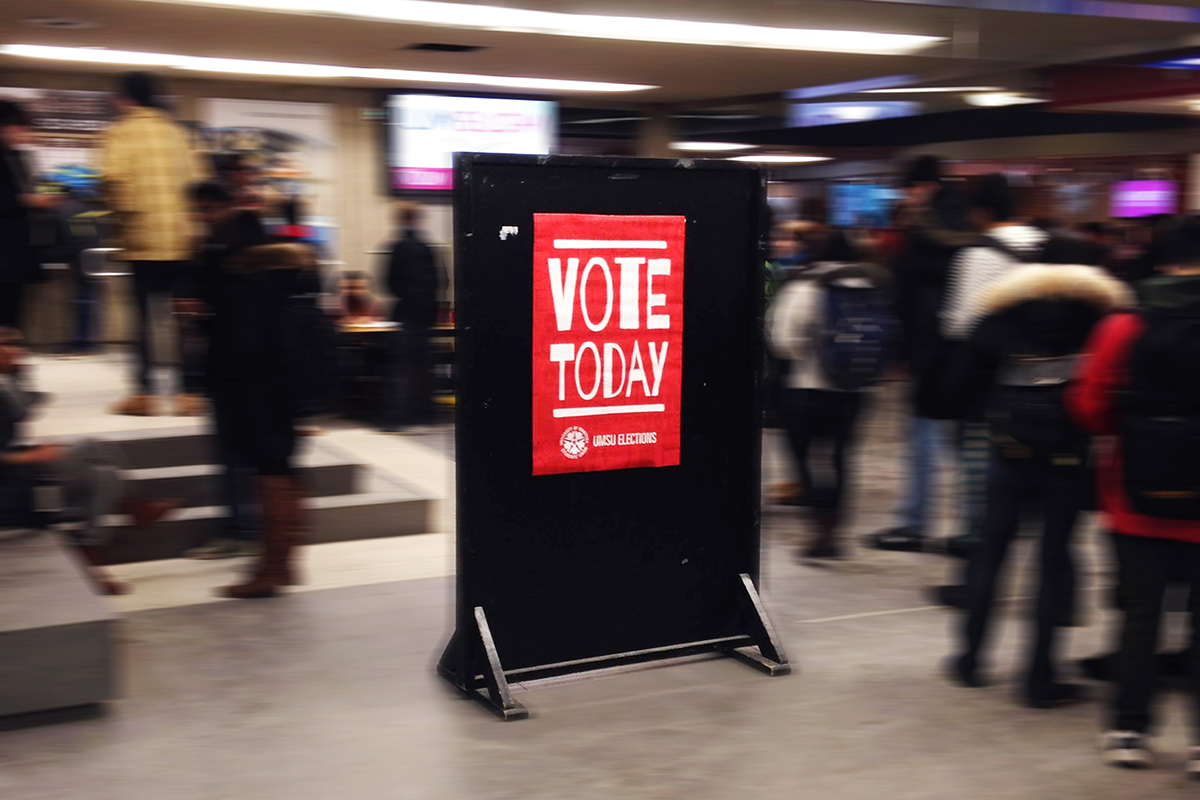 Four Your UMSU candidates and one Clear Slate candidate elected to office, starting later this spring. Photo by Carolyne Kroeker and Tom Ingram

By Seamus Hamilton-Pattison, with files from Mike Still March 9, 2015

The 2015 UMSU general election turned out to be a nail biter, with students electing five candidates from the two competing executive slates, resulting in a mixed-slate executive.

The election became a heated race this year, with nearly all five candidates winning by very small margins.

The race for vice-president external was even closer, with Astitwa Thapa of Your UMSU receiving 2,478 votes or 51 per cent of the vote, while Reanna Blair received 2,384 or 49 per cent.

Zach Leclerc, UMSU’s new vice-president internal, was the only Clear Slate candidate elected. Leclerc beat out Your UMSU’s Christopher Bélanger with 2,570 votes or 53 per cent of the total to Belanger’s 2,303 votes or 47 per cent.

Despite the close results, president-elect Jeremiah Kopp told the Manitoban that the elected executive, which is primarily composed of Your UMSU candidates, is proof of a positive and optimistic mood on campus.

“Your UMSU put forward a clear vision of how we can improve the student experience here on campus. I think we articulated that and I think the results of the election show that as well,” Kopp said.

“The sense of optimism that is on the university campus now, where students feel like we are paving a better way, like we are able to compare to any university [ . . . ] We are going to have a campus that attracts top talent, that puts student experience at the forefront and allows students to have a community behind them at their campus.”

The election was not without its share of controversy.

In the last week of the campaign, critical coverage of Your UMSU vice-president internal candidate Christopher Bélanger was widely circulated on social media. Coverage from the CBC and posts on an anonymous blog both revealed derogatory comments Bélanger had posted on Twitter, about women and the “Arian pride” he felt over his new Mercedes Benz car, as recent as 2013.

“Even if people say things that are reflective of those values in the past, if they show willingness to change and they want to contribute to efforts that do foster equal and inclusive environments, I think that’s something we have to encourage and promote. I think, because comments like these are so frequently made in our society today, they’re really ingrained in our culture [ . . . ] That’s why we need a women’s rights and advocacy representative.”

Leclerc told the Manitoban that he feels confident about his ability to work with the elected Your UMSU members in the coming year.

“I think it’ll be a great working relationship,” he said.

“The election gets heated, but it’s for a two to three week period and that’s about it. After that, we go on and we do work [ . . . ] In the long run we’re all after the same goal, bettering the student experience, so we’ll just sit at the table and work on that.”

According to UMSU’s chief returning officer Jacqueline Keena, the close race between executive candidates resulted in a rigorous recounting of the ballots, which did not conclude until the next morning at 4:30 a.m.

As per UMSU bylaws, candidates and their representatives may request recounts if some of the positions are within a four per cent margin of each other. According to Keena, all present decided the best course of action was to begin the recount immediately.

Keena explained the particulars of the recount process in detail to the Manitoban.

“We divided the number of ballot counters in half and sent half home, just to create a better setting for scrutineers to really look over each one of the ballots counted,” Keena said.

“Then we brought in two additional scrutineers from each of the executive slates that were already on campus. We had them fill out the oath and come into the room as well. Then we just meticulously started this recount process where there was a scrutineer looking at literally every ballot that was counted [ . . . ] We started that around 11:30 p.m. and we finished around 4 a.m.”

Members of both slates released policy manuals in the first days of the campaigning period. With ticket sales and net financial gains increasing over the past two years, both Clear Slate and Your UMSU promised to continue improving the school’s annual Frosh Fest.

Both slates also stated that they would advocate for a reading week during the fall semester, which has been instituted at some Ontario universities.

However, there were some significant differences between the slates going into the election.

Members of Clear Slate talked at length about utilizing campus space more efficiently and advocating for individual student rights and causes. Your UMSU members, on the other hand, focused on renovating and improving existing UMSU structures and expanding on academic scholarships and bursaries.

Keena said she was happy with UMSU and the executive candidates’ efforts to promote the general election and engage the student body.

“I don’t know if it could be emphasized more effectively, but I think the ultimate reason for students to vote is that UMSU does do a lot on their behalf,” she said.

“The executives who are elected to represent them make choices, and when they campaign, they’re letting you know about some of those potential choices they’re going to make on the student’s behalf [ . . . ] It’s really important that students pick who their leadership is.”

Impending UMSU audit an opportunity to reflect on spending rules