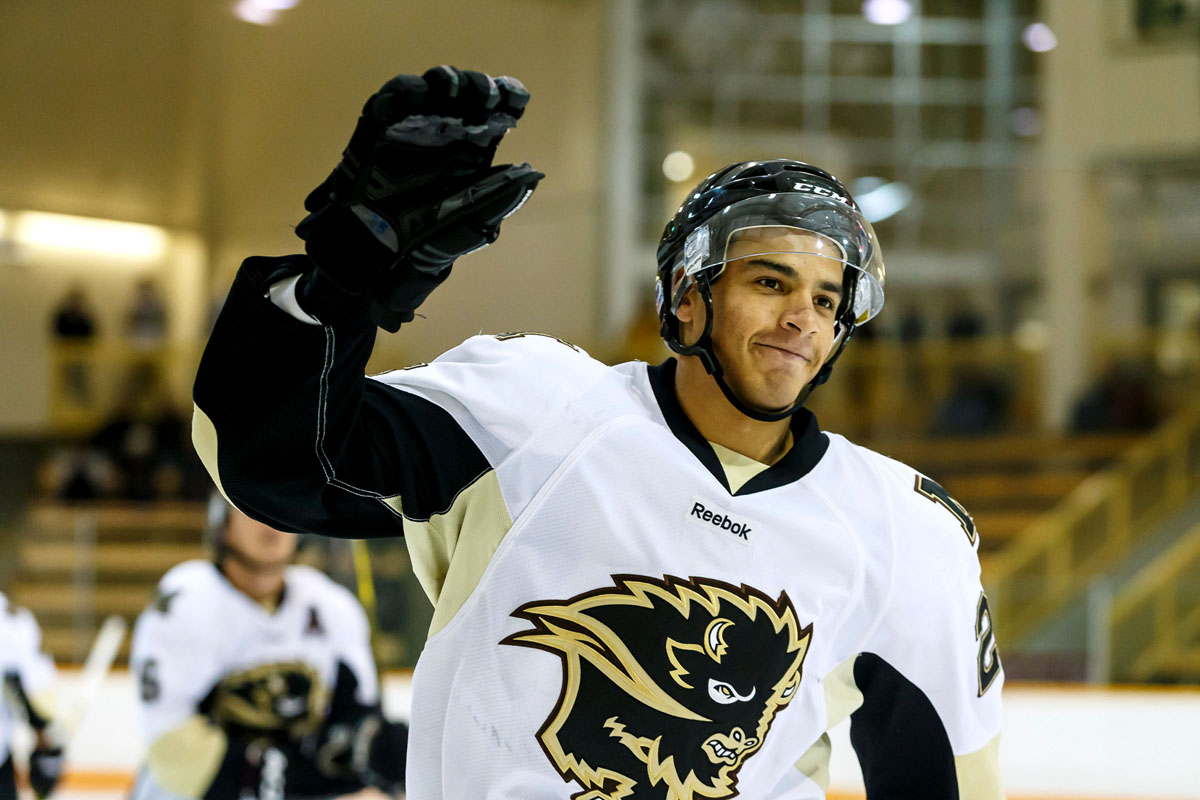 Shaquille Merasty is no stranger to success in the game of hockey. At age 23, he’s already compiled quite the resume, which includes an appearance for Team Manitoba at the National Aboriginal Hockey Championships, and two Turnbull Cups, along with an ANAVET Cup, with the Portage Terriers of the Manitoba Junior Hockey League.

For Merasty, who started playing hockey at the age of four, the commitment has always been there. His family originally hails from Berens River First Nation, but Merasty was born in Thompson, and has played all over the map, from Minnedosa to Michigan – where he received a scholarship to play Division III hockey.

Merasty’s journey down south began with his time playing for Portage. He racked up 143 points in three seasons, and attracted the attention of Adrian College in Michigan, one of the top Division III teams in the nation.

“The coaches from Adrian there came out to Portage and watched a showcase game, and came out to a couple of home games,” Merasty said. “They ended up talking to me after the games and convinced me pretty good.”

Merasty joined Adrian College for the 2012-13 season, and had a tremendous campaign. His 22 goals were second in the nation, and earned him second team All-American honours, along with being named rookie of the year.

Despite his success, the six-foot-three forward didn’t feel completely comfortable at Adrian, and chose to come back home at the end of his first season.

“I enjoyed my time there, I don’t regret going there, but for whatever reason I didn’t feel like heading back down,” Merasty said.”

After playing a year of senior hockey, Merasty returned to school in 2014 – this time in his home province, playing for the University of Manitoba.

“I decided for personal reasons to take a year off, and it ended up working out this year. It feels good to be back and contributing,” said Merasty.

He has certainly contributed, and then some. Merasty has put up 17 points in 22 games for the Bisons thus far, and sees significant time on the ice each week. While he noted that there’s a bit of a difference between the style of play in the NCAA compared to the CIS, he’s still quite comfortable where he is, and how things have worked out.

“I enjoy playing in the CIS, and I enjoy playing for the Bisons,” Merasty said. “I’m just looking forward to getting into the playoffs, and having a deep playoff run with the herd.”

Merasty has grown as a person from his time with Adrian College, and still applies the lessons he learned there to his game and overall character.

“Being farther away from family, you’re a bit on your own [ . . . ] but it was a good experience, and it helped shape the person I am today.”