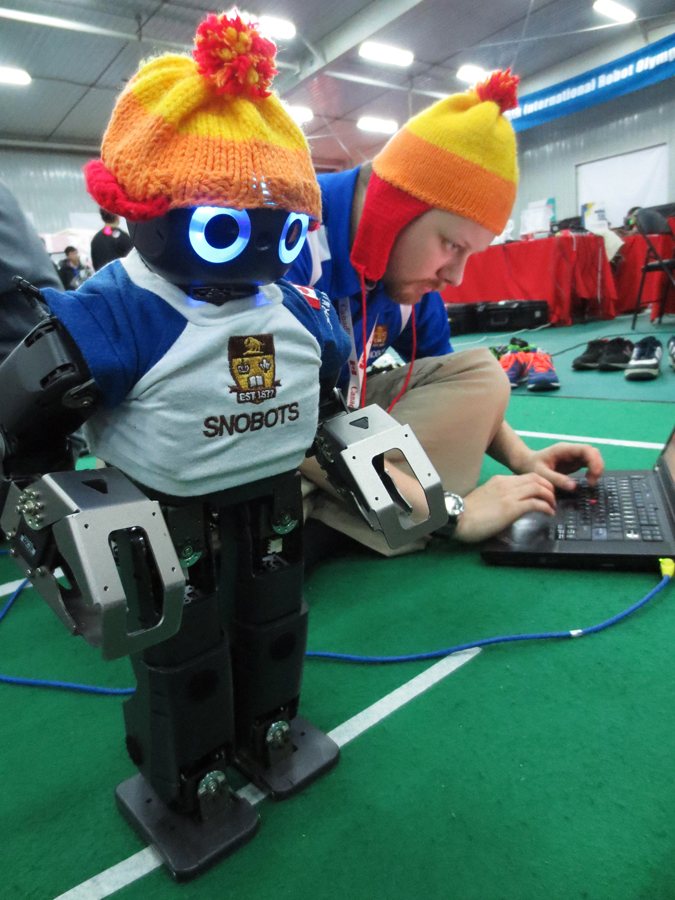 Computer science and computer engineering students from the University of Manitoba have recently returned from HuroCup, an international robotics competition held in Beijing, China.

The four-day event, which took place between Nov. 6 and 10, welcomed 30 teams from around the globe to compete using humanoid robots in an octathlon consisting of sprinting, a marathon, weight lifting, basketball, an obstacle course, wall climbing, penalty kicks, and a lift and carry event.

The U of M’s robots took home two awards; the small robots (47-cm tall) brought home silver in the wall-climbing event, and the large robot (85-cm tall) received bronze in the sprint event.

Jacky Baltes, computer science professor at the U of M and chair of the HuroCup organizing committee, first started doing research on artificial intelligence in 1996 and began researching humanoid robots in 2002.

However, part of the paradox is that when it comes to simpler processes that humans take for granted every day, computing becomes more of a challenge.

“Compare this to face detection or object recognition, navigation indoors and outdoors, grasping of objects, natural language understanding. In those areas, computers are [much] worse than five-year-olds, yet no one calls little Timmy a genius because he can look at a picture and say, ‘Oma and Opa in front of a Christmas tree with a red toy truck.’ Yet, this ability is so far beyond the state of the art of what we can do with computers,” said Baltes, highlighting the challenges of developing humanoid robots to compete in HuroCup.

The U of M team, working out of the Autonomous Agents Laboratory on campus, collaborated with the Amirkabir University of Technology in Iran on the development of their robots. The U of M team primarily focused on developing software and intelligence for the robots, while the Amirkabir University of Technology team was more involved in developing the mechanics.

Particularly innovative features of the robots that the U of M entered into HuroCup include a fully decoupled software architecture for behavioural control, a new walking engine that enables omni-directional walking, a vision algorithm to detect the shape of objects, and an ego-motion estimation algorithm using optical flow.

The advantages of engaging students in a competition like HuroCup include showing how their research functions in the real world where the environment is dynamic, providing opportunities to network with leading robotics experts from around the world and learning from them, and furthering global robotics research.

Such networking has resulted in some research exchanges, including a long-standing collaboration with the National Kaohsiung First University of Science and Technology in Kaohsiung, Taiwan. Two members of the U of M robotics team spent two months last summer doing research at the university.

“For many researchers in Asia, building a fully capable humanoid robot is the equivalent of the Apollo program – the biggest scientific challenge of the day. For most, the main focus is not competition, but participants at these events see themselves as making their contribution to a blue sky dream goal for humanity,” said Baltes.

To find out more about robotics research at the U of M, visit the Autonomous Agents Laboratory website at aalab.cs.umanitoba.ca

Death on the syllabus