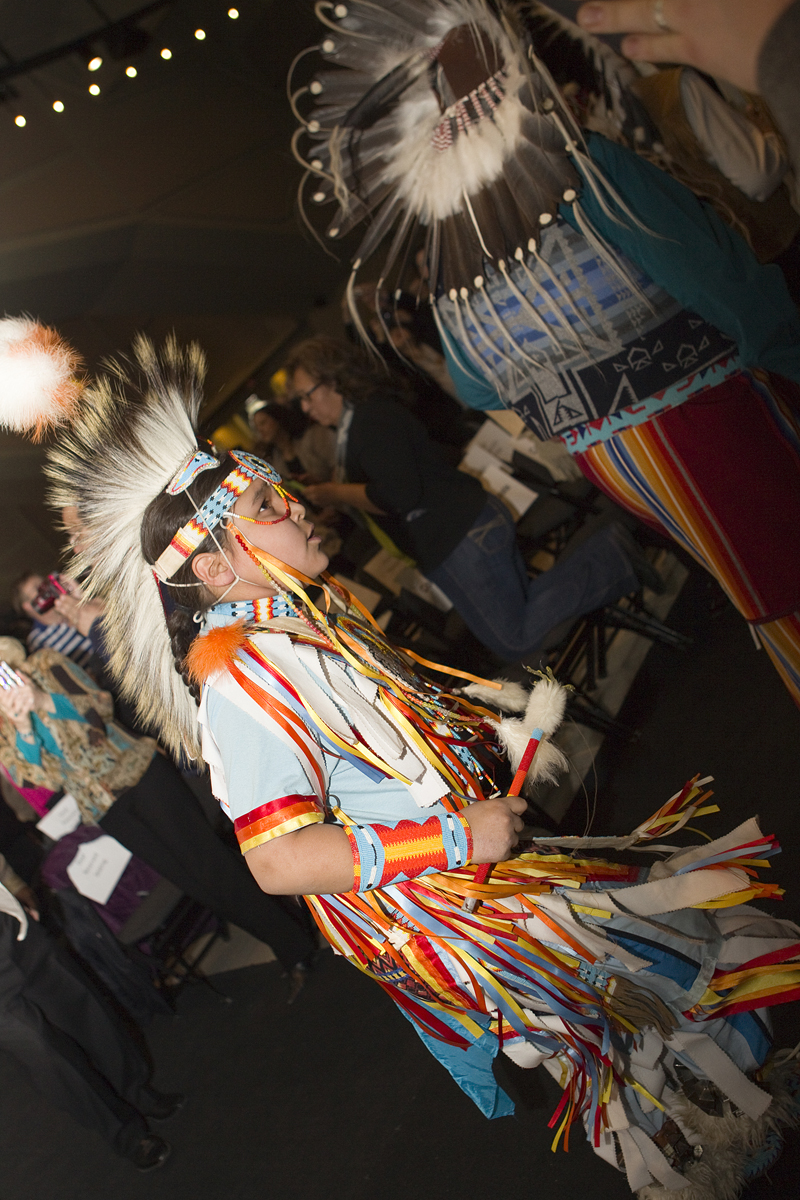 At the final national event of the Truth and Reconciliation Commission of Canada (TRC) in Edmonton last week, there were a number of gestures of reconciliation—and some notable absences—as the TRC approach the final year of their mandate.

“I think we made a turn from collecting the truth and [now we will] begin to start focusing on the second part of the mandate; [that is], what do we do with the truth in terms of informing reconciliation going forward. And you saw that and you felt that in the room. You saw it and heard it in the gestures of reconciliation. And I think we have made an important turn to focus now in that area,” said commissioner Chief Wilton Littlechild to the Manitoban.

Justice Murray Sinclair echoed Littlechild’s sentiments in his closing remarks at the event.

“We will now take up the challenge of putting all of these things that we have heard into a forum that all of Canada will have to respond to in a positive way, and we will carry forward your message,” said Sinclair.

“Reconciliation is the commitment and bravery to stay in the room,” said Niigaanwewidam Sinclair, assistant professor in the department of native studies.

Littlechild was encouraged by the gestures of reconciliation at the event in Edmonton, and felt they demonstrated an increasing awareness of residential schools and their legacy.

One such gesture was the Edmonton Oilers’ “Celebration of First Nations Hockey” during their game against the New York Rangers. The game coincided with the final day of the TRC event.

The celebration included a performance by Asani, an award-winning Aboriginal women’s trio from Edmonton, singing the Canadian anthem.

There to perform the ceremonial puck drop were residential school survivors Fred Sasakamoose, the NHL’s first Aboriginal player, and Littlechild. Other in-game events included a video on residential schools and stories in the game program.

Litttlechild felt that this was a significant gesture of reconciliation that would have a significant effect on educating the public.

“The game’s attendance was around 18,000, and the Edmonton Oilers have 326,000 followers on their social media [ . . . ] all those people immediately became informed about TRC and the history of residential schools,” he said. “When you think about trying to educate the public about this story, the power of sport has a big role to play.”

The province of Alberta also made significant gestures of reconciliation.

Many MLAs and ministers, along with the acting premier of Alberta, were in attendance for all four days of the event. Aboriginal Relations Minister Frank Oberle announced changes to the curriculum of students from K-12 to include the history of residential schools and treaties.

Littlechild felt this was a positive step forward—making Alberta a pioneer in repairing the relationship—and a move he hoped other provinces would follow.

“An announcement like that is very encouraging for a brighter future. Children will now learn about the TRC, residential schools and treaties [ . . . ] this will result in better relationships. For Alberta to announce this publicly and make it mandatory is very, very encouraging,” he said.

Municipal government and industry members were in attendance, with mayors from Edmonton, Calgary, and Wetaskiwin, announcing that their councils had declared this year to be a year of reconciliation.

Justice Sinclair commented on the impressive actions of local leadership.

“I am thrilled about the commitment to action that we heard from the leaders of this jurisdiction [ . . . ] they stand as an example to other jurisdictions in this country, and now we are going to turn to them and say, ‘What are you doing about reconciliation?’” The federal government and the TRC

Bernard Valcourt, Minister of Aboriginal Affairs and Northern Development, was in attendance; however, Littlechild expressed frustration over the lack of engagement coming from the federal government.

“We have not been able to engage the federal government, the political elites, enough yet. Mind you, it isn’t finished, but we have [only] had a few senators and members of parliament show up,” said Littlechild. “Personally I would like to have seen more. If you compare the provincial representation and local mayor and council representations, there were many more from that level [than the federal level].”

One of the goals of the TRC is to “promote awareness and public education of Canadians about the [residential school] system and its impacts.”

Littlechild felt that in order for this goal to be achieved, people in leadership positions need to hear the stories of survivors.

“People have told us they didn’t know about [survivors’ experiences]; when they hear the personal stories they are really shocked by some of the stories, but at the same time they want to participate in a good way,” said Littlechild.

“So, if you reflect back at the seven events, it was generally just the minister of Aboriginal affairs that attended, but more ministers and MPs should have attended [ . . . ] Maybe they are busy, but as a former MP, I would have made an effort to be there.”

“The act of recognizing what happened and being present is how reconciliation happens,” he said. “If there is no recognition there is no accountability. [This results in] total erasure,” he said.

The TRC was established in 2008 as part of the implementation of the Indian Residential Schools Settlement Agreement. One of their tasks was to look forward in terms of rebuilding and renewing the relationship between Aboriginal and non-Aboriginal Canadians.

The relationship between the TRC and the federal government has been rocky.

The extension of the TRC’s mandate to June 30, 2015 was due to the commission not having timely access to these documents. With the final national event over, the work of the commission will now focus on completing their four-volume report, formalizing their recommendations, and organizing a closing event.

When the commission concludes its work in June 2015, all holdings will be turned over to University of Manitoba as the national research centre. The research centre will engage in more statement-gathering, conduct ongoing research, and act as a national archive.

“It was very important for me to hear my classmate say ‘reconciliation begins with me’ [ . . . ] [Reconciliation] is an important journey that starts with the individual; it starts with forgiving yourself first, and then going to the family, then the community,” he said.

“The youth must learn about this history. We are still not anywhere near where we ought to be in terms of the level of awareness regarding the residential school history and legacy.”