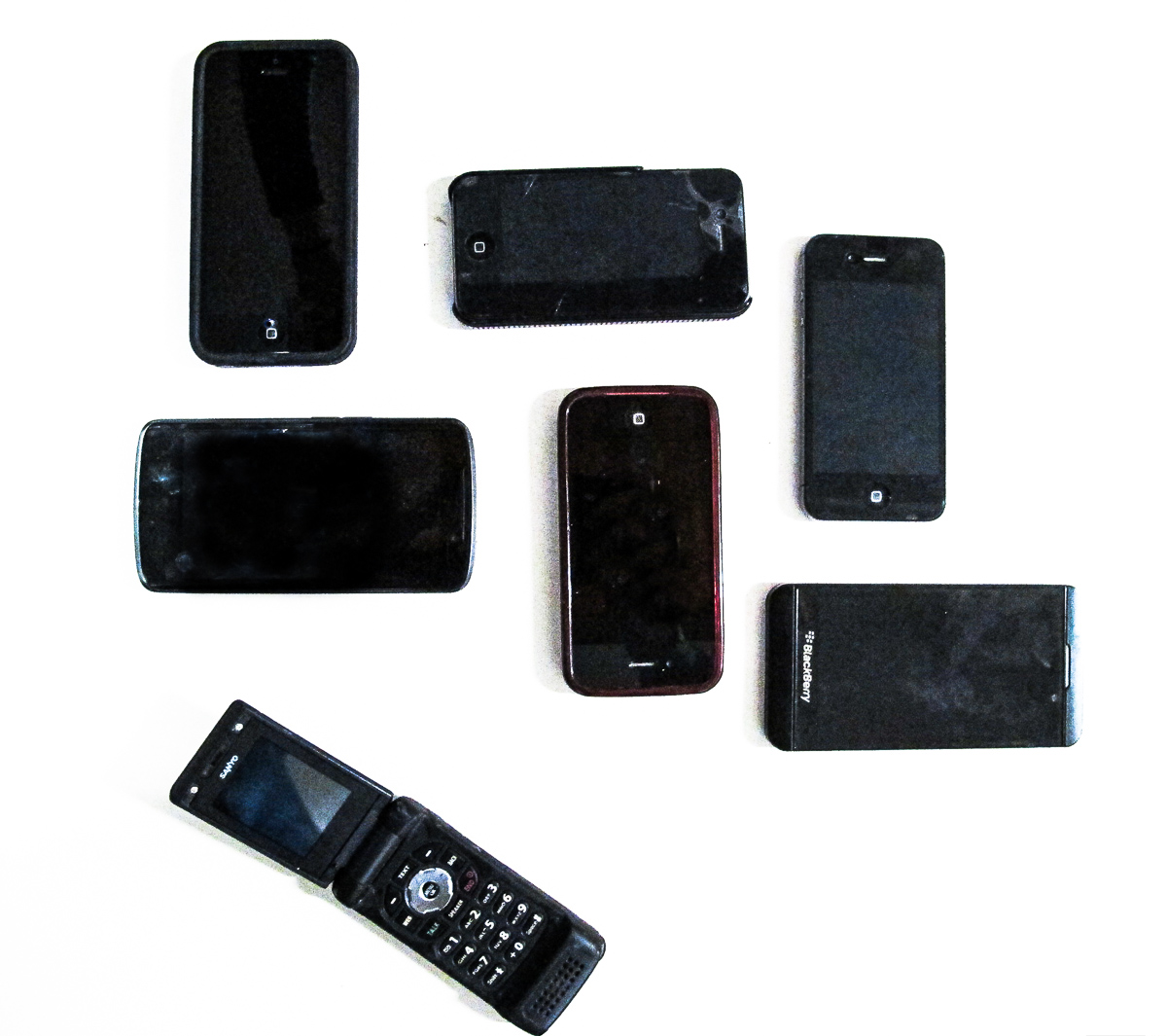 Seemingly everyone has a smartphone these days. According to surveys from 2013, almost half of all Canadians and more than half of all Americans use the high-powered mobile devices. Until recently, I was one of those last few holdouts, sitting hunched over my slide-out Nokia Surge typing impeccably spelled text messages on its full QWERTY keyboard. But now even I have fallen. Luddites take note: the rats are jumping ship. You can give in or you can build a log cabin in the Alaskan wilderness.

After several sweeping changes in circumstances and inclinations, I came to realize that my little Nokia wasn’t cutting it anymore. Also, I had dropped it several times and you could see daylight between the two halves; slide-out phones were not, it turns out, a good idea.

I signed up for a new contract with an iPhone. I loathe Apple products in general and touchscreens especially, but I am surrounded by performing arts people for whom the iPhone is the device of choice. There is some value in conformity in a piece of technology whose function is mainly social. I am now, alas, one of those people.

My experiences thus far have been mildly positive. I finally understand what all that Snapchat business is about. I no longer have to take an hour-long bus ride home to check my email during the day. I carry the King James Bible and the essays of Montaigne (all the reading I’ll ever need) with me wherever I go.

Sophisticated calendar and to-do list software helps me be more productive by laying out my entire day ahead of time. The president of the United States has said he only wears suits in two different colours to avoid wasting energy on making small choices. With ubiquitous smartphones, we all get to be the president.

In other words, it’s not for nothing that these devices have become so popular. They offer serious functionality with very few drawbacks. Smartphones are only going to continue becoming more common until the ocular iMplant is ready for consumer use, and it’s by no means clear that this is a bad thing.

It has been suggested that these devices cause us to be overconnected and lose sight of the real world. This is not a complaint I’ve had; most of the time I’m wasting is time I would have wasted anyway in much less productive pursuits like drumming my fingers or contemplating my mortality. My concerns about smartphone technology are a little more complicated.

When I was in grade seven, my teacher proudly told us we were all “digital natives” – insipid education-speak referring to people who have never experienced a world without computers and the Internet. This brought forth the predictable chorus of snickers—we were, after all, 12 years old—but the takeaway message was clear: you people know your way around computers. The technological world is your oyster.

If the advent of smartphones didn’t kill my teacher’s prophecy, it certainly falsified it. Essentially a smartphone is a toy computer. It is a sad parody of the kinds of things that can be done on a real computer with a keyboard and mouse.

The interface, streamlined for reasons both of space and consumer appeal, communicates mainly through icons and context-dependent buttons, rather than the hierarchy of words that made the Windows environment so justly successful or the esoteric incantations of the command line.

As for apps – well, I suppose I must resign myself to using that horrible word now. It is an abbreviation for “applications,” and that’s basically what they are: miniature simulacrums of the programs you can run on a computer. They are, for the most part, designed to perform one narrowly circumscribed function in one hermetically sealed environment.

In other words, smartphones are designed and built by and for the superficial. They may not cause you to be bad at functioning in digital environments – they assume you are and encourage you to continue to be.

The Apple philosophy in general, and the smartphone world over which it has had such a powerful influence, encourages technological complacency. Smartphones reward this complacency with a seamless end user experience that is only possible because of the tightly controlled environment. Meanwhile, with each new innovation they become more inextricably embedded in our lives.

Already, after just over a week of use, my iPhone contains my text messages, my voice call functions and voicemail, my calendar and to-do list, a number of photos, and six online accounts. It is only with the most heroic effort of will that I have prevented it from linking those six accounts together.

These include accounts used for personal business, social interaction, school, and work. In the olden days keeping these separate was easy because we didn’t have the infrastructure to tie them together. The question of whether such a thing was desirable never came up.

In today’s brave new world, they can all be accessed from one device which sits in my pocket, knows exactly where I am in the world at any given time, and gently encourages me to share that information as widely as possible. Is this what I want?

On some level it must be. Otherwise, why did I get the phone instead of a large bottle of scotch? Obviously in purely economic terms of productivity versus drunkenness, the trade-off is worthwhile to me.

But I can’t help feeling skeeved out by how dependent we are becoming on these devices – not because I object to dependence on technology per se, but because this particular technology is so thoroughly defined and controlled by large companies who have no particular concern for my well-being.

Each predicted innovation makes me less, not more, optimistic about the future. There is a great deal of noise being made about paying for things with your phone, with futurists talking about the elimination of all money as we know it and the move to a smartphone-based economy.

For some, the logical consequence of certain apps that already exist is a phone that will tailor your recreational and social experiences to your habits and preferences (which it will know, of course) in much the same way that Google tailors your search results to your browsing habits.

To me, at least, these predictions sound awful, and yet not so awful that they won’t come true. The progression of technology for the foreseeable future seems pretty clear: we’re going to continue on a path of tighter integration and less control. The immediate conveniences we are offered in exchange are simply too great to turn down. But the modern-day techno-consumer may be forgiven for feeling as though he’s been placed in a bind by bewildering forces far beyond his ken.

The unremarkable is revealed by planetary defence test