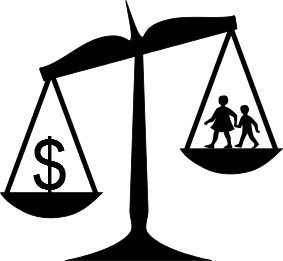 The term “ethical consumer” grew into Western culture in the late 1980s – it was the title of a British magazine. The idea of support being rendered and distaste being expressed through purchasing habits is far older. Currently the concept of ethical consumption is growing in scope, as large corporations scramble to express their social responsibility and consumers gain easier access to information related to the source and effects of the production of the products they purchase.

Consumption rules our lives. We live it from the moment we wake up to food and caffeine (products) through the moment we turn off whatever light (product) we’ve been reading (a product) by.

In part, this is the nature of being a live creature. Imagine a squirrel that does not gather nuts.

In part, this is the nature of the culture we find ourselves in. Imagine a squirrel that spends its days playing video games, watching movies, racing cars, globe-trotting, drinking and smoking like a mad man, then buys nuts (nuts gathered by starving baby squirrels) on credit when winter comes.

The ethics of consumption are of primary interest to all of us. Dollar voting is the idea that the consumers that drive economies can guide them in the “correct” direction. In engaging in consumer activism are we successfully practising dollar voting? Can we?

How do we weigh environmental and social concerns? To what degree should we value the social and environmental impact versus the personal impact of our dollar? What additional responsibility do we have, as privileged citizens of the world? How important is it to know the source of the products we purchase? What products come out of an ethically problematic production process? What should we do about it?

For myself, as I came to this feature, I found it much easier to ask questions than to find answers. Greenwashing is effective, or corporations would not engage in it. From what I can gather it has in turn led to a backlash of overstatement and oversimplification on the part of those seeking absolution from the developed world’s collective guilt. Economic disparity, power disparity (what are resources if not power?) and obfuscation dominate relations in our supply chains.

As I write this introduction, it occurs to me that I do not know where any of the items in my living room came from. I am so far removed, alienated, from the labours behind my environment that turning an “Allen key” is the closest to the production of the objects herein that I have come. After researching for several days, I can say, with some degree of certainty, that the computer I am typing upon has components originating in horrid places, ravaged landscapes, from the hands of people labouring in conditions indistinguishable from slavery to all but a pedant. So too the food I look forward to. So too the clothes I wear.

I live a life of luxury, built on the backs of my fellow humans and financed with an advance on the inheritance of future generations.

This feature turns a multifaceted lens on the issue of ethical consumption. We begin with a look at some locals who are taking action. Kevin Linklater highlights a recent sustainability event on the University of Manitoba’s Fort Garry campus. Katy MacKinnon examines a local business, offering a tempting taste of the potential of the fair trade movement. Our centrefold is a sampling of locations around Winnipeg where fair trade products are offered, compiled by MacKinnon, with a map provided by Bram Keast. Katerina Tefft outlines the tenets of veganarchism, a political philosophy founded on the premise that oppressions do not occur in isolation. Quinn Richert troubles the idea of acting without sufficient knowledge or power.

The feature ends with examinations of the progress of free software, textile production, and the animal entertainment industry, by Tom Ingram, Anastasia Chipelski, and Carlyn Schellenberg, respectively. Bradly Wohlgemuth’s illustrations on these pages emphasize oft hidden implications of consuming even the most mundane products.

I hope this feature raises questions for our readers, as it did for me. I hope that we are challenged as the scope of our actions is revealed, that the smokescreen loses a bit of its opacity, and that we address the most important question: Where to start?

Construction underway on various projects throughout the U of M

What to do when your workplace is toxic