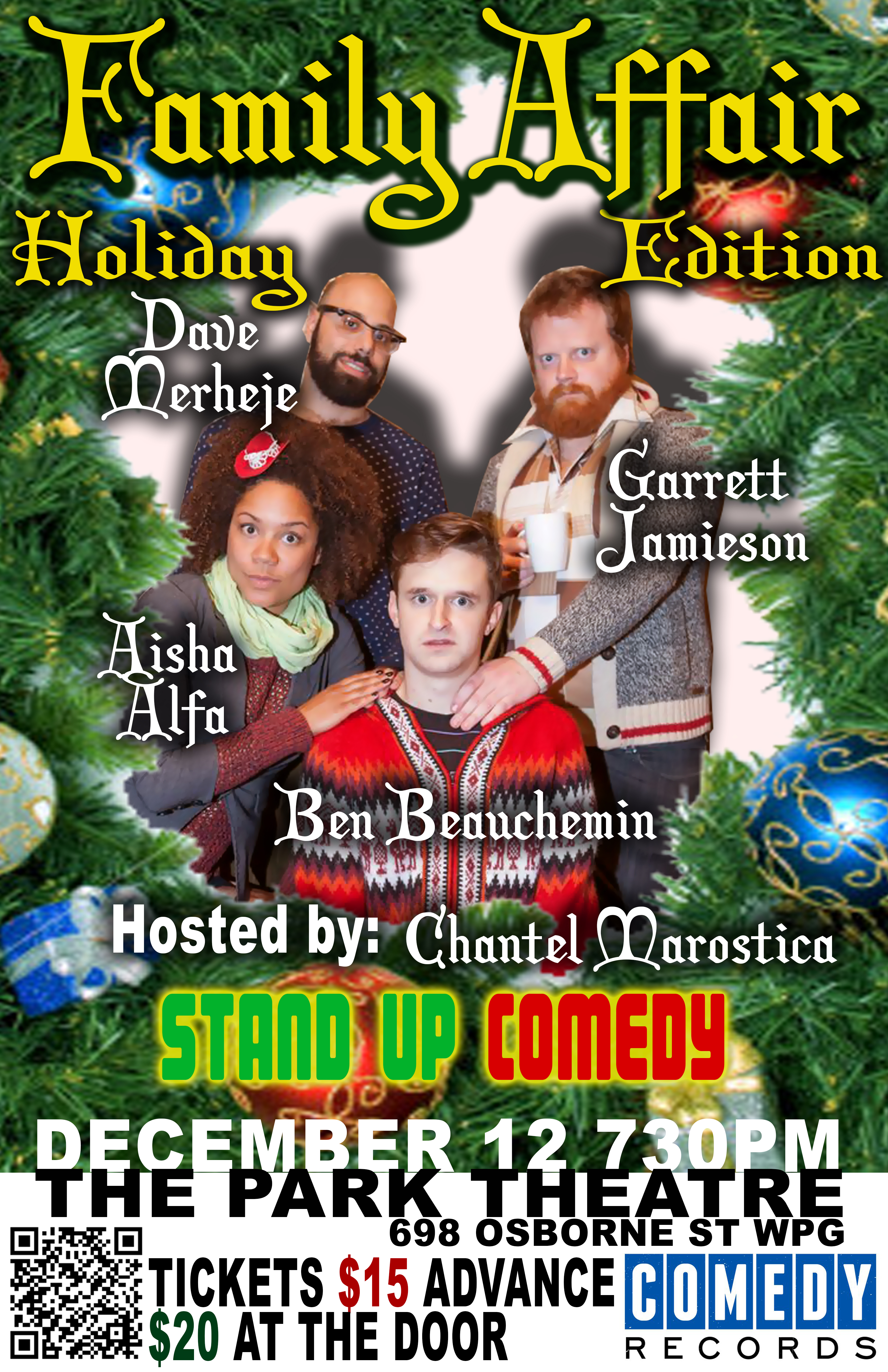 If you take four Toronto stand-up comedians—Dave Merheje, Aisha Alfa, Garrett Jamieson, and Ben Beauchemin, three of whom are former Winnipeggers—put them at the Park Theatre, and add one Winnipeg comic to host (Chantel Marostica), you’ll get Family Affair: Holiday Edition.

Family Affair is Dave Merheje’s one-man show, and was part of the Just for Laughs Comedy Festival in Montreal.

Along with Aisha Alfa, Merheje will headline the Dec. 12 event, telling personal stories of his Middle Eastern family and growing up in a Lebanese household.

“It will be an honest, fun, and raw show. I will leave it all up there,” says Merheje.

The Just for Laughs 2011 Homegrown Competition winner and previous cast member of MTV Live, Merheje likes to rant and tell stories on stage.

“Whatever I feel at the moment, I talk about; I have set jokes but I like to improvise and be organic and have a stream of [consciousness].”

Aisha Alfa, winner of Winnipeg’s Funniest Person with a Day Job in 2011, got into comedy “on a whim.” After a successful first set at Rumor’s, she realized her passion for telling jokes. As soon as she got off stage, she was offered another gig.

When asked about her own comedic style, Alfa says she has trouble answering that question.

“I asked Chantel Marostica and she [described my style as] ‘worldly, energetic, silly, with a positive perspective on life.’ So… that, I guess!”

Winnipeg native—and actor (New in Town)—Ben Beauchemin has been in Toronto for over two years working on his stand-up career. Like Alfa—who uses her afro, dating, and her family for joke material—Beauchemin draws on personal experiences for inspiration.

On his comedic approach, Beauchemin says, “I don’t really want people to know where I’m going with [my] bit.” He enjoys playing with the audience, losing them for a second, and then winning them back with “the big swing.”

Beauchemin’s worst onstage experience occurred when he started recording his set and got heckled as soon as he began.

“I [couldn’t] quite hear what the person was saying, or see who they were, so I kept stopping mid-sentence and trying to tell people to be quiet and so on [ . . . ] When I finished my time I took the recorder off the seat and saw that I had pressed play rather than record, so I ended up getting heckled by a recorded version of my own voice.”

Garrett Jamieson moved from Winnipeg to Toronto when he was 22, and showcases a “bizarre” comedic style: “Look at a picture of me, and it would be very disjointed, all over the place [ . . . ] [a big] party where anything goes.”

Jamieson and Mark DeBonis created The Lot, a comedy club which was recently the runner-up in Now magazine’s Best Comedy Club in Toronto.

Jamieson says Winnipeg’s comedy scene is not too different from Toronto’s, but that more people in Winnipeg come out to support shows. Beauchemin agrees that the crowds in Winnipeg are larger, but notes that there are more opportunities for shows in Toronto.

Alfa says this group of friends is very excited to do the show. Beauchemin also looks warmly on his fellow performers, noting that host Marostica is one of his favourite Winnipeg comics, and says “the three other comics on the show are some of the best in the country.”

When asked what to expect from him on Dec. 12, Jamieson says, “a machine gun full of one-liner jokes.” He notes that the comics of Family Affair: Holiday Edition are “from a newer generation of comedy (which is good for comedy to come from).”

Propagandhi on their new album, Trump, and Pallister