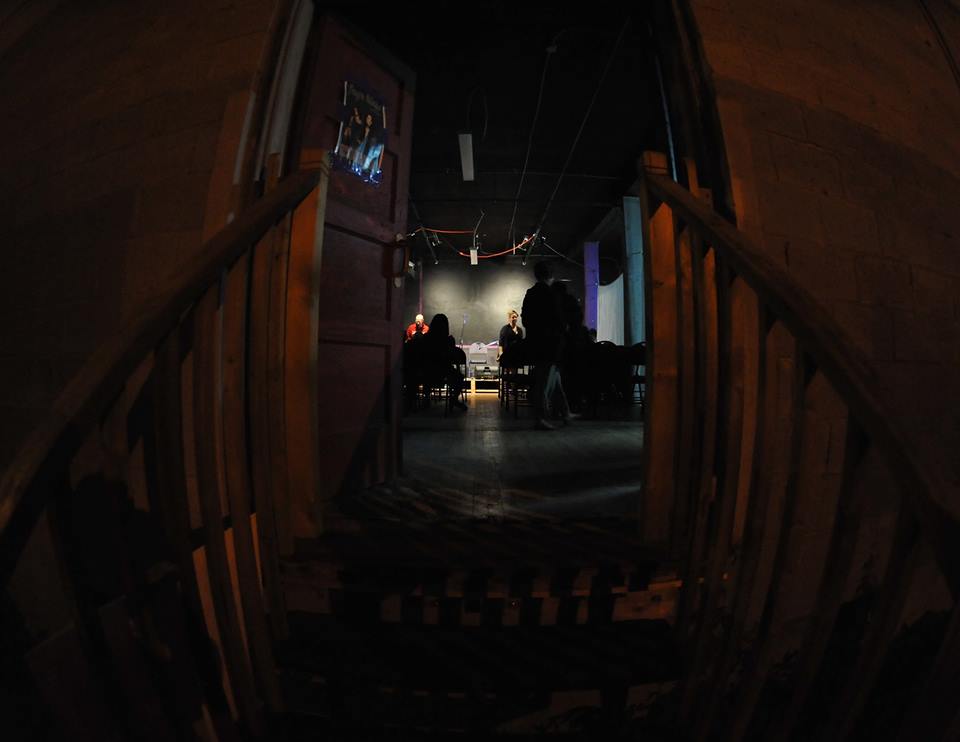 Winnipeg’s answer to Andy Warhol’s Factory in the 1960s is the Frame Arts Warehouse.

Program director Ali Tataryn runs Frame, whose spaces are occupied my myriad artists. Musician Paul Little and comedian J.D. Renaud operate the Purple Room, which opened in the building this March. The space is pretty cheap – you can expect to pay 12 to 15 dollars per-square-foot for a similar space on Albert Street in the Exchange and about 75 cents per-square-foot at Frame.

Based on a conversation they had on New Year’s Day 2013, Little and Renaud created Winnipeg’s most experimental performance venue. First opened in March of this year, the venue hosts a plethora of acts including laser tag, Sunday matinee all-ages hardcore shows, dance parties, improv, experimental noise-core, stand-up comedy, and more.

“We’re catering to just-under-the-cusp comedians, musicians, artists who can’t book the Cavern, the Pyramid, the Park Theatre, the Gas Station Theatre,” says Renaud. “They’re expensive; we’re more affordable. Can you get 50 to 60 people to come to your show? Then you should be at the Purple Room.”

“The key word is weird,” says Little. “This is a weird room in the best possible sense of the word.”

Little describes one of the events he cherishes the most and hopes to nourish: the Cake n’ Shakes. Eight years ago he invited people to his dad’s living room to celebrate a friend’s birthday with cake and milkshakes.

“She made the cake, I made the shakes.”

By the fifth annual celebration it was held at a pub with live music as a fundraising social. Last year it was at Frame’s A Gallery, and this year it was at the Purple Room as a daylong festival.

“I have this weird vision of cake and shakes spreading across North America,” says Little.

Plans for next year involve sponsorships from bakeries. The plan for year 10 is a daylong outdoor festival at Old Market Square.

UCB Theatre, an improv troupe that began in Chicago, has two theatres in New York and one in Los Angeles. The small venues hold either just over 90 or up to slightly over 150 people. Shows are inexpensive: $8 or free—and several shows run any given night. People take classes and attend events there and small audiences can see big names – comedians such as Ben Schwartz, Patton Oswalt, Louis C.K., and Donald Glover have performed at its locations.

A few blocks from the UCB Theatre in L.A. is Hotel Café, a performance space that holds about 50 people – the Purple Room also has a seating capacity of 50, and standing room maxes out around 90. All performers get exactly the same amount of time onstage.

During set up and tear down artists interact and possibly end up collaborating. Hotel Café has launched numerous huge names in the entertainment industry, including Katy Perry. Little hopes to recreate in Winnipeg what UCB and Hotel Café are doing in L.A., and Renaud concurs: “It’s like, ‘I took the journey to the Purple Room where I hope to see something I’d never seen before.”

The entrance is off an alley behind the building, bordered by a chain-link car park and a furrier.  Renaud says the garbage bin is often full of animal carcasses, but from far down the alley at night, the magical hue of white and purple lights illuminates the otherwise decrepit back lane, beckoning the adventurous patron. Renaud laughs, “It’s not dangerous; it’s just a strange journey.”

The venue is alcohol-free, allowing audiences and performers of all ages to attend.

To get a taste of the vision of these artist-producers, check out the By Coincidence Comedy Festival. The event includes a performance by Vancouver comedian Simon King, and next Saturday Renaud is reshowing his award-winning Fringe Festival performance Self-Destructivism for one night only, followed by an Electric-Circus-esque dance party. There will also be a show by Rumble Pak Improv, and Comedy Prom, a night of stand-up comedy, professionally-led classes, improv, and a 1980s and 1990s-themed prom-night-styled dance party.

The Purple Room is a 1,300 square-foot space in Frame Arts Warehouse at 318 Ross Avenue, on the edge of the Exchange District. To book an event call 204-799-4389 or visit www.thepurpleroomatframe.com.