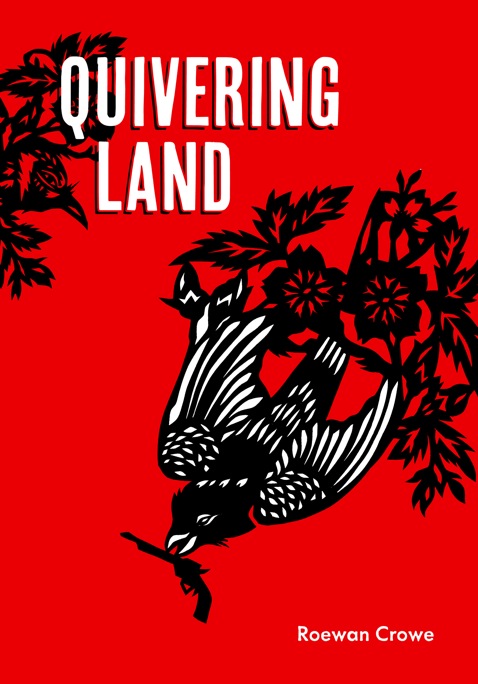 Anticipation, Fear, and pleasure all connect with the adjective “quivering.” In naming her experimental long poem Quivering Land, local author, academic, and curator Roewan Crowe applies all of these meanings.

“It is important to me that words remain open, so that possible meanings might begin to proliferate. I was drawn to the word quiver/ing, drawn to tremulous, shaking movement as a gesture, or response, a word that communicates embodied experience. It is a word I can feel in my body.”

Two of the narrative’s characters exist in distinct realms. One, Clem, resides in the Western, which is filled with ghost towns, cowboys, and gunslingers. The other, Violet, is found in her studio making art. For Crowe, this distinction between locations questions the solidity of the Western:

“I also wanted to confine Clem in the Western and Violet in the studio/gallery to see what would happen for them. Is it possible to decolonize the Western? How does the artist decolonize? What are decolonizing actions?”

Crowe explains both her and visual artist Paul Robles—whose work accompanies the publication— begin in a place of abundance, and end up without excess, taking only what is necessary and leaving room for something else to occur.

“Paul’s process of cutting images is similar to my writing process. We both start with a blank page. Paul removes cuts of paper, I remove words. My process involves laying down an abundance of words, intense writing, overwriting, and then I edit down, remove words to create space in the text.”

Robles works primarily with origami paper, approaching it unconventionally by cutting—instead of folding—it.

“Paper can be fragile and vulnerable, yet may hold some power and knowledge – a metaphor of the human condition [and] a central theme to Roewan’s story [ . . . ] Being able to reconfigure/shape/slash/trim/reassemble to create new myths, new worlds, hopefully gives the reader/viewer greater options.”

Decolonization occurs when openness is offered.

“I hope the reader might also find space for their own experiences and imagination. Paul’s images do this too: they are evocative and do not dictate meaning,” Crowe says.

Even in their collaborative process, Robles explains that the work of one did not dictate what the other artist had to do.

“The themes in Quivering that resonate for me and my work were the exploration of the self, to be loved, and the struggles—often violently—to be open and free – to be borderless. The notion of nowhere is “home” – or potentially everywhere, was my interpretation.”

Robles elucidates his understanding of feminism—significant in working with Crowe, who has a feminist approach to her academic career—as part of connecting with those we are not familiar with and who are different from us.

In academia as well as in art, Crowe recognizes a rigidity by which she has chosen not to be confined. Moving across established boundaries speaks to the notion of decolonization.

“Writing territories have been claimed through the use of categorization, language, and power,” says Crowe. “I remember using the word ‘experimental’ to describe my work with a writer who clearly thought I did not fit in this category. Quivering Land is my experimental poem.”

Quivering Land, published by Arbeiter Ring, is being launched at McNally Robinson at Grant Park in the atrium on Wednesday, Nov. 27, at 7:00 p.m.