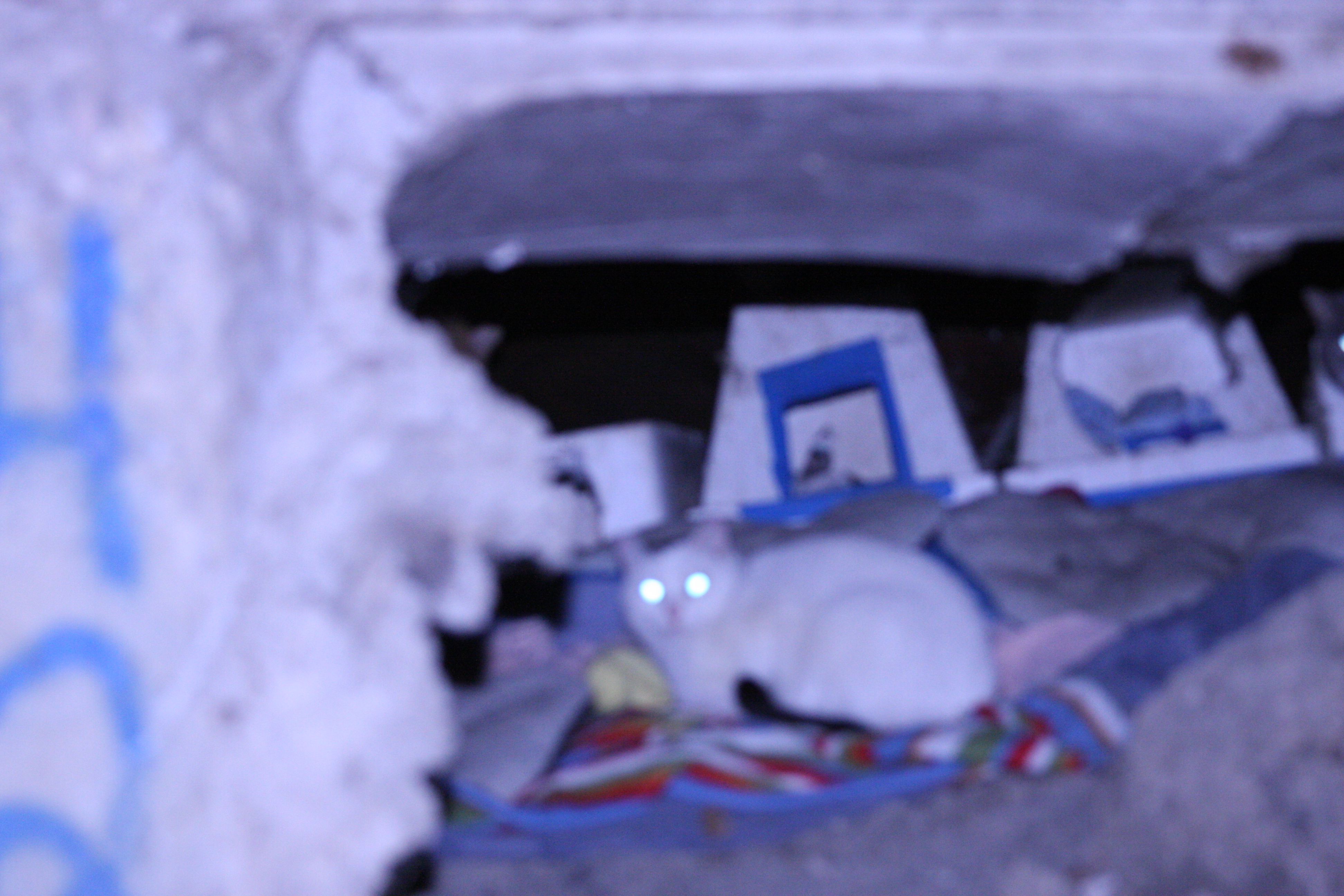 I am lucky to have a friend who walks along the banks of the Seine River. One year ago, he took me to see one of his discoveries.

Up on the mucky riparian zone, somewhere in south St. Vital, a wedge is worn out of the concrete slab of an apartment’s parking garage. We were there at midnight, of course, and my friend had his flashlight with him. When he turned it on, there were about 50 pairs of eyes glowing in the beam’s periphery.

My fear at that time stemmed partially from the cats, and partially from the awareness that someone could be looking down at you from the top of the concrete pad. I have a deep-rooted fear of confrontation, and I didn’t want to have any kind of conversation with the crooked-fingered old woman that supposedly cares for the animals.

Now I confess that part of the reason I’m calling this one of Winnipeg’s scariest places is to come to grips with it. Last week, I thought I’d return for a better look.

If you’re quiet when you walk from the top of the parking lot to the banks of the Seine, you’ll hear cats running away from your approaching footsteps. You’ll see one or two dart past the dumpsters and the pallet of rusty old propane tanks.

Some other things to notice: the urban cave’s surface is almost entirely covered with graffiti. There are dirty margarine containers filled with cat food placed strategically around the space, and filthy old blankets have been laid out all over. People are here, and I doubt they would be receptive to the presence of outsiders.

The creepiest sensation is seeing the glow of cats’ eyes from the cracks and crevices in front of you, simultaneously hearing one run by behind you. It becomes obvious you’ve crossed a line. You’re not on the border. You are crouching in the middle of a feral cat colony.

The deeper you go into the space, the more you are forced to crouch, and the farther you move from the only viable point of exit. If you’re claustrophobic, don’t visit.

My second journey into the cat colony was productive. I clarified why I don’t like going there in particular, and was also able to draw some fairly broad conclusions about what generates fear for me.

The first time, I would have said there was something scary about the cats themselves. The fact that you’re on their territory and vastly outnumbered is uncomfortable. Exposure to all of those disease vectors is also troubling for an irretrievable hypochondriac.

But that is not all. The second time, even though the cat count had diminished significantly, the fear was more or less the same. The place makes you hear your own heart beat because it feels like somewhere you’re not supposed to be.

I have worried about being cornered in the wrong place my whole life, and that is why the cat cave gives me a good scare. If you’re the same, look for that this Halloween. Wherever you go, just make sure you have a brave guide.