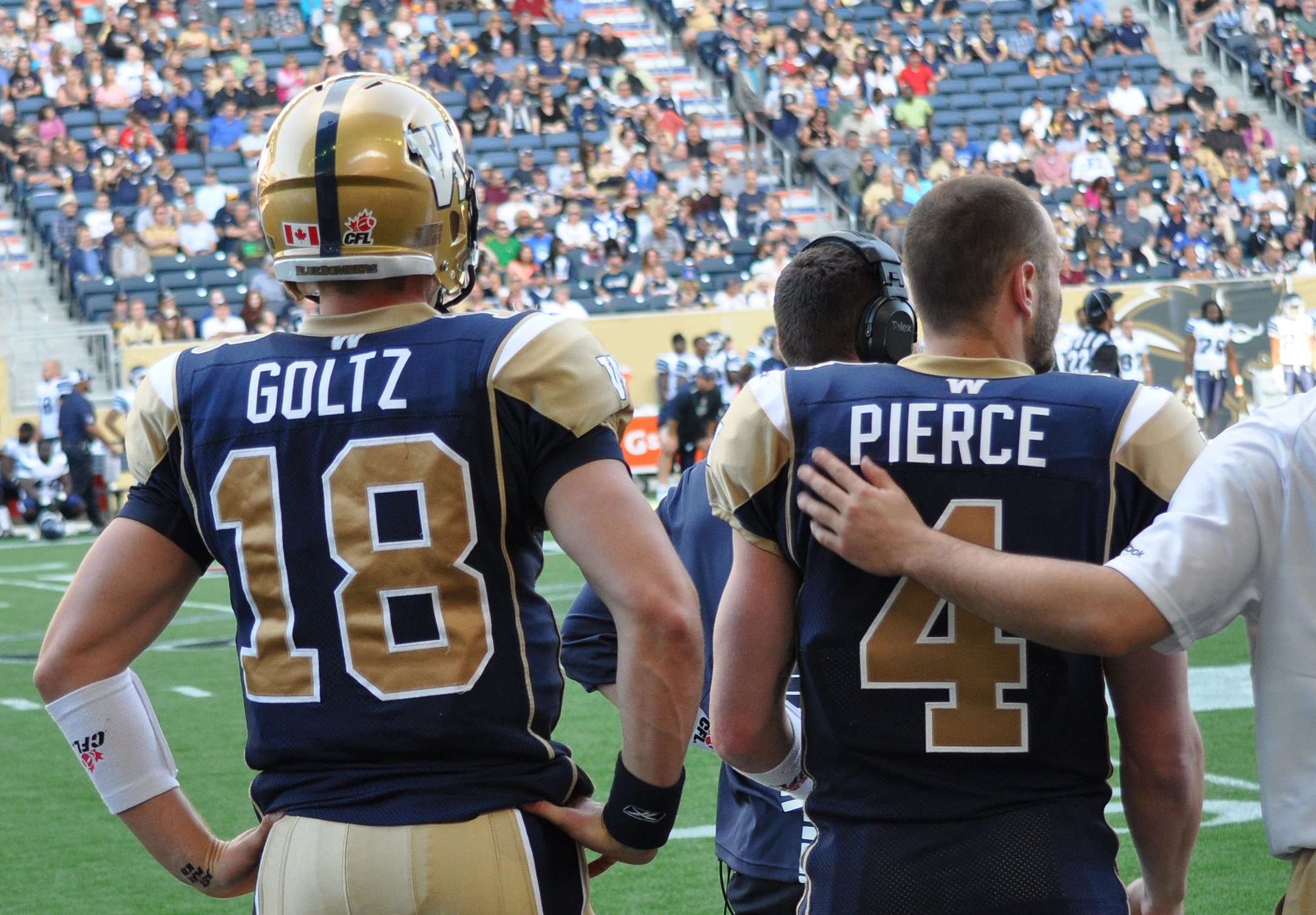 Only six weeks into the 2013 CFL season, and unfortunately for the Bombers and their fans, the biggest news stories surrounding the team have occurred off the field.Firstly, the Buck Pierce era of Blue Bomber football looks to have come to an anti-climactic end in Winnipeg, as the former BC Lion pivot was demoted to third-string on the quarterback depth chart. Buck’s demotion means that second-year QB Justin Goltz has the opportunity to prove to the coaching staff and management that he’s worth protecting from the Ottawa RedBlacks entry draft.

Then there’s the management issues.

After dropping their fifth loss of the season, the Blue Bombers board of directors made a big move, replacing team president and CEO Garth Buchko with former Bomber fullback and local entrepreneur Wade Miller. Miller’s first move as acting CEO was to fire Joe Mack, the controversial general manager who failed to build off of the successful “Swaggerville” season of 2011.

Mack made some controversial decisions during his time as Bomber GM. First and foremost was his decision to fire head coach Paul LaPolice early into the 2012 season and replace him with defensive coordinator Tim Burke.

After an utterly embarrassing opening to what was supposed to be a fresh start in a new building, calls from fans for the Bombers to “sack Mack” had steadily grown. With all the troubles on the field and issues related to transitioning into the new stadium, Mack’s dismissal is the single best piece of news fans have received all year.

Now, the biggest challenge facing Miller and the board of directors moving forward will be to make changes to the culture of the club; specifically, moving the club away from the cycle of shifting blame and unceremoniously firing coaches.

One of the bigger criticisms that could be levelled against the Bombers is the team’s lack of consistency over the past decade. Despite two Grey Cup appearances since 2003, the Bombers have gone through six different head coaches. Doug Berry holds the distinction of being the longest-serving coach in that period with three years at the helm, from 2006-2008, and may well have won the cup in 2007 if not for a disastrous encounter between Argos linebacker Kevin Eiben and Bombers QB Kevin Glenn’s left arm.

Berry was fired despite finishing second in the dismal East Division with an 8-10 record and a home playoff game against the Edmonton Eskimos. His replacement, Mike Kelly, was far from an improvement.

Paul LaPolice’s treatment was almost a mirror image of Berry’s. He came in, revamped the team into a Grey Cup contender, and then was unceremoniously punted the following year. Not only is it bad optics, it’s a poor financial decision; the Bombers were forced to pay out Berry, Kelly, and LaPolice for the remainder of their contracts, despite them not working for the team. Mike Kelly aside, if you have enough confidence in a coach to sign them to a specific contract, where is the logic in firing them and having them collect paycheques for doing nothing?

That’s an awful way to build consistency within the organization and certainly won’t instill confidence in the hearts and minds of the fans – the paying customers who are key to keeping this whole organization afloat. “Rebuilding year” is a phrase I would like to see thrown out of the Bombers’ vocabulary, as every other season over the past 15 years has seemingly fallen under that category.

Patience is a virtue, but it’s running thin throughout Bomber Nation: waiting for relief from the 22-year Grey Cup drought, waiting for front office consistency, and now waiting for a first win in the brand new building is taking a toll.

Miller was a surprise choice as the new CEO, and just like Goltz, he is going to need time to develop into the leader that this team needs. And whether or not the team’s new GM wants to hire a new head coach, I think it’s important to let Tim Burke coach out the remainder of his current contract, and surround him with knowledgeable coaching staff who can offer support.

This season was supposed to be the start of a new era of Bomber football, and it still can be: the beginning of an era of common sense and accountability.