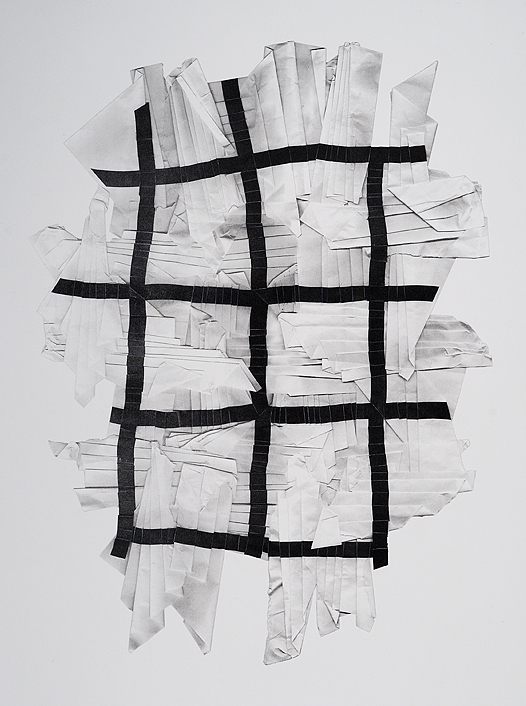 Concrete bricks constructed out of delicate paper prints, repurposed records from your grandparents’ basement, and lithography prints made by meticulously folded paper – this is To Break & To Build, the current installment at aceartinc. by Winnipeg-based artist, Suzie Smith. Smith’s work reassigns the purpose of objects and their message and focuses on issues surrounding consumerism, craft, value, labour, and the homemade.

Smith is an interdisciplinary artist who has been producing and showing work for over a decade using mediums such as video, textiles, casting, and collage. To Break & To Build is a body of work mostly comprised of screen printing (printing using a stencil burned into a screen) and lithography (printing using a large stone), as well as digital prints used to repeatedly construct physical objects such as bricks and hammers.

After completing her first year of the bachelor of fine arts program at the University of Manitoba, Smith continued and graduated from Concordia University in Montreal with a BFA (Distinction). Smith then moved to Glasgow from 2009-11 to complete her master’s at the Glasgow School of Art, and has since returned to live and work in Winnipeg. Smith taught a session of first year screen printing at the U of M and also worked at Martha Street Studio as the education and outreach programming coordinator. Currently, Smith is the professional programming coordinator at Martha Street Studios, where she coordinates the gallery and facilitates art sales.

Over the years, Smith’s work has consistently shown themes of repetition and mass production.

“I am interested in how printmaking is both a fine art and industrial technique. Lithography was used to print books and newspapers, [while] screen printing is used to print t-shirts and signage,” says Smith.

“Printmaking [gives] me a strict structure that I can then push against or subvert.”

In 2006 Smith was part of a group exhibition entitled Supernovas  (curated by Shawna Dempsey and Lori Millan) where she installed her “Action Figures” series. The series is compiled of handmade plush dolls on which Smith screen-printed her own renderings of iconic celebrities such as David Bowie, Tina Turner, Frida Kahlo, and Courtney Love. Hundreds of plush dolls were suspended from the ceiling, creating a sentimental interpretation of the celebrities’ image.

Today Smith continues to subvert the industrial quality of mass production into something more playful and carefree. In To Build & To Break, behind carefully placed pieces of glass, her featured series “Second Hand Records” is comprised of found record covers with parts masked out using white and black ink. In this series, Smith assigns new meaning to overlooked and discarded records showcasing images of polka artists, religious choirs, and 60s icons.

“With regards to ‘Second Hand Records’ I am interested in using printmaking to both reveal and conceal elements of the found record covers. This helps me give the image a new meaning. Often the viewer becomes just as interested in what is being hidden as what is being shown.”

For Smith, the process and concept of her artmaking are linked. While there are 35 records in total on display, this is only a small portion of Smith’s larger collection of repurposed covers. Over the years she has been meticulously collecting items from Goodwill stores and Value Villages with one thought in mind: to create art.

To Break & To Build will continue to be on display at aceartinc. until July 26.