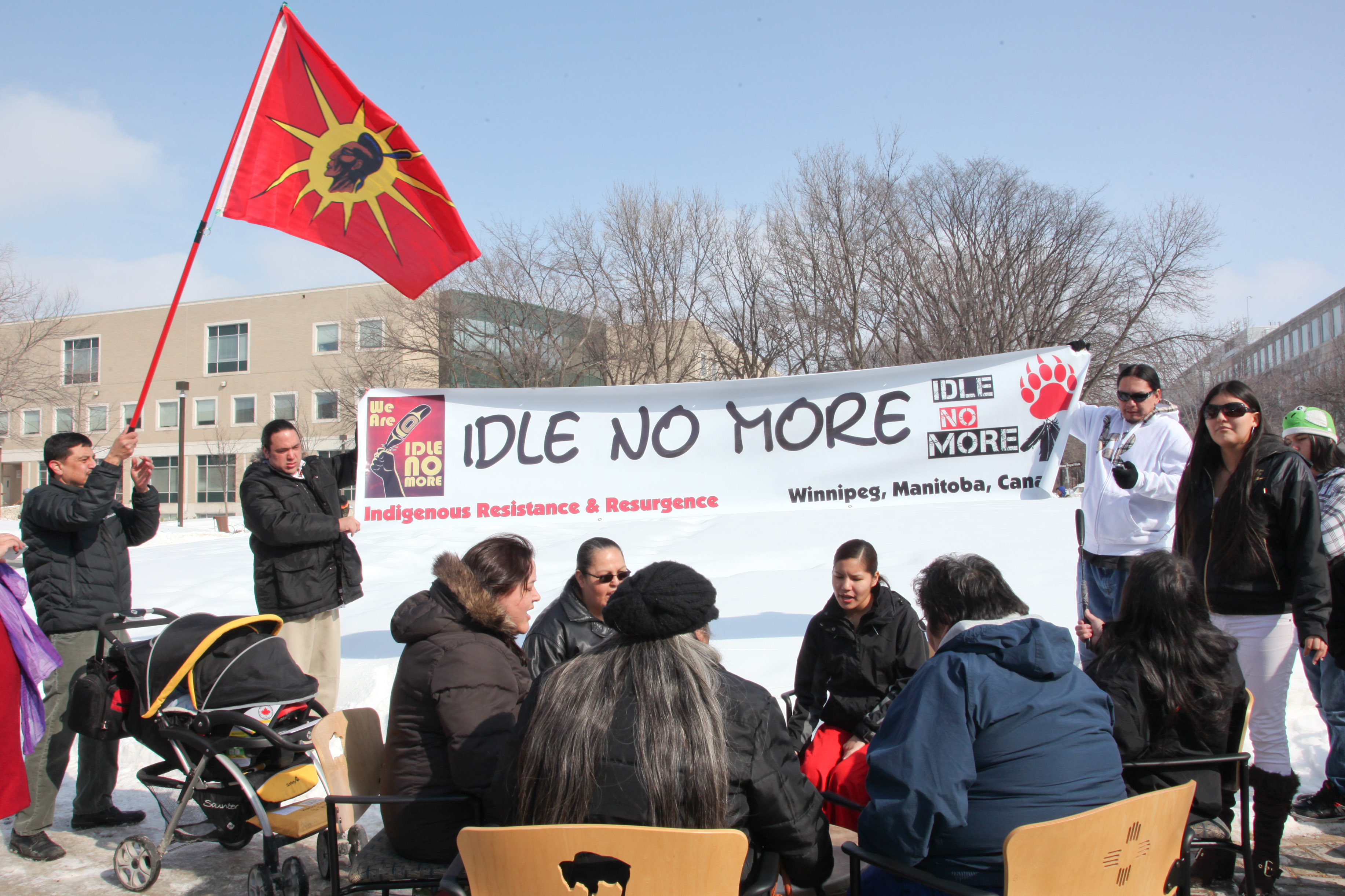 A symposium hosted by the University of Manitoba Native Studies Graduate Students’ Association took place on Friday, Mar. 8 and included a variety of discussions on issues relating to the Idle No More movement.

The all-day event included lectures on traditional forms of governance, the shifting status of Anishinaabe women in Canada, as well as a historical overview of First Nations-Crown Treaty agreements paired with a critique of the Indian Act.

Also included were a round dance outside Migizii Agamik and a talk by PhD candidate Emily Grafton entitled, “Why Non-Indigenous Canadians Should Care About Idle No More.”

All symposium events were followed by open discussions between the audience and panel members.

Ryan Duplassie, a PhD candidate in the department of native studies and organizer of the symposium, pointed out during his talk on Treaties and the Indian Act that the Treaty process was not always a fair deliberation between parties with equal bargaining power.

“It was mentioned earlier that the Treaties were negotiated under duress and that is correct. The commissioner didn’t actually come to negotiate. They had a preset Treaty that they could derivate from very little.”

Following his talk, Duplassie told the Manitoban that, while it is true that the Treaty process was often unfair, it should still serve as a positive focal point for Idle No More.

“The infrastructure for Treaties is already in place. They’re already enshrined in section 35 of the Constitution. So we do have a legal and historical basis for at least using them as a platform for this conversation. As it stands, the relationship is abusive but the treaties have the potential to lay the framework for ethical and equitable solutions as we move forward.”

“They are part of our Constitution and something that all Canadians should value. They will at least help get the dialogue going,” he added.

Charles Wagamese, former executive director of Treaty 3, joined Duplassie at the podium to offer his own critical analysis of the legal relationship between the federal government and First Nations peoples. He explained to the audience that it is often difficult for First Nations peoples to trust the federal government during negotiation processes.

Neil Bouchey, a self-taught expert on traditional forms of governance, spoke to the University Centre crowd.

Bouchey told the Manitoban that it is not necessary for Idle No More to separate itself from the Assembly of First Nations (AFN) in order to embrace traditional self-government.

“Self-government and the AFN are interconnected and should not be separated,” said Bouchey.

After Bouchey and other panelists took questions from the audience, Emily Grafton gave a presentation focusing on technical details of the C-45 omnibus bill and why the contents of the bill should worry Indigenous and non-Indigenous Canadians.

Central to Grafton’s presentation were four critiques that she says apply to all omnibus bills. According to her, bills such as C-45 “do not enable due course in parliament and limit opportunity for democratic debate.” Also, said Grafton, items may become buried within the bills and they “include items outside the scope of the budget.”

Grafton pointed out that conflicts often arise between First Nations and federal government leaders due to different understandings of the concept of meaningful consultation.

“There is a consistent tension and discrepancy between what the government and Indigenous people view as the scope or definition of consultation,” said Grafton.

“First Nations people in Canada use a definition of consultation that is derived from the United Nations Declaration on Indigenous Peoples and the Supreme Court of Canada. The fact that the Canadian government does not use such a definition is cause to stop and think.”

A long discussion with members of the audience followed Grafton’s presentation.

Sessions addressing misconceptions about Aboriginal culture as perpetuated on online news forums, as well as a workshop on “bridge-building strategies” for Aboriginal and non-Aboriginal communities followed shortly after.

The rise of University Inc.

U of M bolsters indigenous support with two new funds