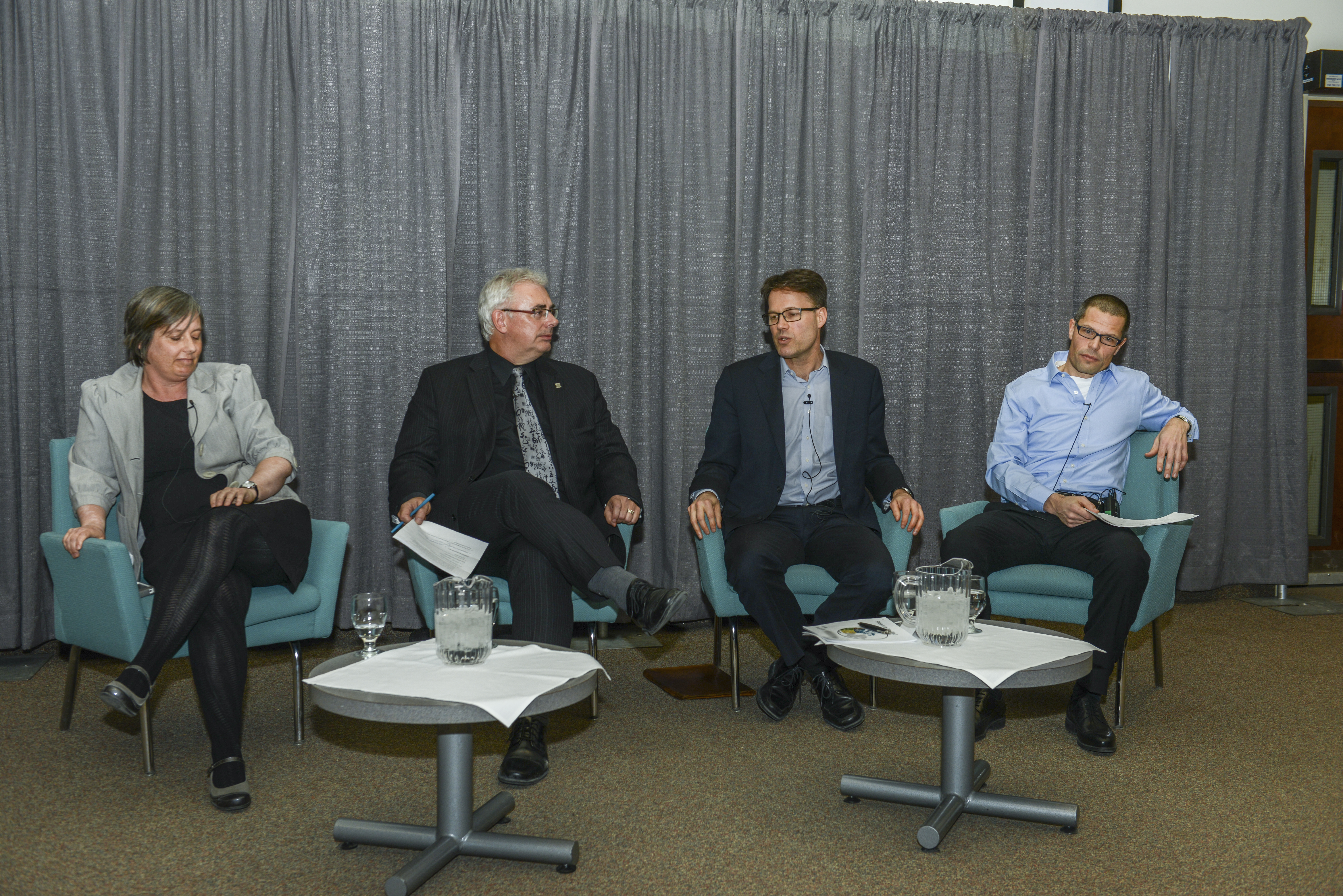 David Barnard, vice-chancellor and president of the University of Manitoba, hosted a talk on Wednesday, Jan. 16 entitled “The New West: The Political and Economic Rise of Western Canada.”

The talk was the first 2013 event for Barnard’s speaker series, Visionary Conversations. Each talk in the series brings together experts to discuss issues “relating to an area of strength outlined in the university’s Strategic Planning Framework, reflecting the role the university can and should play in fostering dialogue around emerging issues.”

The conversation featured a panel including Adele Perry, Canada research chair in Western Canadian social history at the U of M; Paul Vogt, clerk of the Executive Council for the Province of Manitoba (as well as U of M alumnus and Rhodes Scholar); and Ian Hudson, a professor of economics at the university.

The talk, held at the Robert B. Schultz lecture theatre, commenced following a short reception and focused on how the character and role of “Western” Canada—defined as stretching from Manitoba to B.C. and including the territories—has changed and is about to change, within both national and global political contexts.

Perry opened the discussion by challenging the notion that there is anything particularly “new” about Western Canada’s political character.

“The present-day Western Canada that most of us in this room live in and some of us study only looks literally ‘new’ if we have a very static and very truncated view of the past,” said Perry.

She explained that residents and scholars of this region tend to think of the west as it may have looked in the 1880s to 1940s, as a region characterized heavily by agriculture and European immigration, when in fact fragments of the urban, multicultural Canadian West that many recognize in the present only began to arise following the Second World War.

“Newcomers to the early 19th-century fur trade were often struck by its cosmopolitan character,” Perry told the audience. “In 1816, a visitor to the North West Company post at Fort William wrote that he found people from England, Ireland, Scotland, France, Germany, Italy, Denmark, Sweden, Holland, Switzerland, the United States, the Gold Coast of Africa, the Sandwich Islands, Bengal, various tribes of Indians, and a mixed progeny of creoles.”

Following Perry’s remarks, Paul Vogt gave a presentation entitled “Policies for the New West,” which, as Vogt put it, outlined “five policy prescriptions to fill out a new west agenda.”

According to Vogt, the five policy ideas taken together “articulate a western vision that unites the different regions and also makes a contribution to nation building in Canada.”

Vogt emphasized that first, “skills and people strategy are more important than resource strategy for the economic future of the west.”

He elaborated that living up to this policy must include further developing post-secondary education, working to improve Aboriginal education outcomes, and increasing immigration to provinces in the west.

Second, Vogt encouraged policy makers to “turn northward” and focus on developing resources such as mines. Thirdly, Vogt announced to the audience, “It is time to make a proactive presentation to Aboriginal citizens of the west on the issue of economic partnerships.”

His last two points focused on balancing the tension between resource extraction and environmental protection and water management.

“The number one issue for citizens living on the prairies is water management and water quality protection,” stated Vogt.

Professor Ian Hudson concluded the first half of the evening with a detailed analysis of the recent economic growth in the west. His presentation argued that the “rise of the new west,” in economic terms, is driven mainly by the recent success of Saskatchewan and Alberta.

Hudson presented data to the audience tracking various indicators of economic performance, such as individual after-tax income for all of the provinces comprising Western Canada.

“What becomes clear here,” said Hudson upon sharing and explaining the data, “is that the rise of the west is really the dramatic rise of Saskatchewan and the continued rise of Alberta.” Hudson went on to explain that the prosperity in these two provinces is founded upon their reliance on energy resources as “staple products.”

The last half of the Visionary Conversation consisted of a back-and-forth dialogue between the panel and members of the audience. A reoccurring theme during the question and answer session was a dilemma raised earlier by Vogt – balancing environmental protection against economic stability attained by exploiting finite energy resources, particularly in the Alberta tar sands region.

The next Visionary Conversations event is entitled “Crouching Tiger, Hidden Dragon: Does the Rise of China Mean the Decline of the West?” and will be held at the Robert B. Schultz lecture theatre on Feb. 6.

The U of M: a leader in campus (un)sustainability