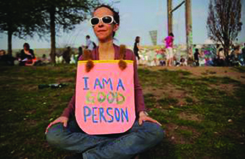 How do the choices that we make affect us? When we are forced to make a call on tough decisions, is there a necessary dichotomy between choices – that is, is one choice necessarily “bad,” and the other “good?” Moreover, does choosing or acting “wrongly” automatically make one a bad person?

These are the questions that filmmaker Ingrid Veninger explores in her latest film, i am a good person / i am a bad person. The film follows a week in the life of filmmaker Ruby White and her teenaged daughter Sara – played by real life mother-daughter duo Veninger and Hallie Switzer. The two women, both on the cusp of making life-altering decisions, are forced to look within themselves and reflect on what they truly believe is best for them.

The pair embarks on a trip to Europe to promote Ruby’s new film, leaving behind Ruby’s husband and son in Toronto. After an audience member interrogates Ruby about the film’s intended message and catches her off-guard, she spirals into a frantic state of escapism. She surrenders herself to the Euro nightlife and turns to drinks, dancing, and other men.

When Sara—who is implied to be pregnant at the beginning of the movie and is battling her own anxieties—pleads with Ruby to take her back to the hotel, Ruby refuses, subsequently causing a rift in their already tense relationship. Sara decides not to accompany her mother on the rest of the trip; instead, she travels to Paris alone to visit her cousin.

The characters’ uneasy dynamic partly stems from their polar differences in personality. Whereas Ruby is flighty and outgoing, Sara is more contemplative and reserved. I judged Ruby’s aloofness immediately; after blatantly refusing to take her daughter back to the hotel, it is relatively easy to place Ruby into the “bad mother” category. Yet as the movie progresses, layers of the contrived persona she strives to emulate are peeled back, and the core of Ruby is revealed.

We begin to see her not as an irresponsible mother with reckless abandon, but rather as a dejected woman just trying to regain her sense of joie de vivre. Sara’s own troubles, of course, are no less important. Deciding what to do with an unplanned pregnancy at nineteen is never a heads-or-tails kind of decision, and while it does not completely deter her from enjoying the sights of Paris, the weight of this responsibility continues to loom over her head throughout the trip.

The issues that the movie tackles are hardly uncommon, and the idea of watching two people travel around Europe until they finally make their respective decisions may even seem a bit mundane. However, Veninger makes the film worthwhile by employing full usage of the setting to emphasize the two main characters’ internal struggles and bring those struggles to the surface.

Rather than using Europe’s beautiful, foreign atmosphere as a place for Ruby and Sara to escape their troubles, Veninger uses the setting to echo their troubles back to them.

Perhaps most intriguing of all is Veninger’s use of supporting characters as vessels of wisdom; the happy children playing with bubbles that Sara observes in Paris, or the inebriated man at the bar in Berlin who asks Ruby if she is a “good person or a bad person” – the people that the two women encounter are all necessary for facilitating their growth. Small details like these are so common in our everyday lives, yet Veninger draws from these experiences to show how they each play a part in how we formulate our identities.

i am a good person / i am a bad person is beautifully bittersweet. It reminds us that our choices are a matter of perception. It isn’t necessary that we come to an outwardly defined “right” solution; what’s necessary is to look within and truly ask ourselves what feels right for us.