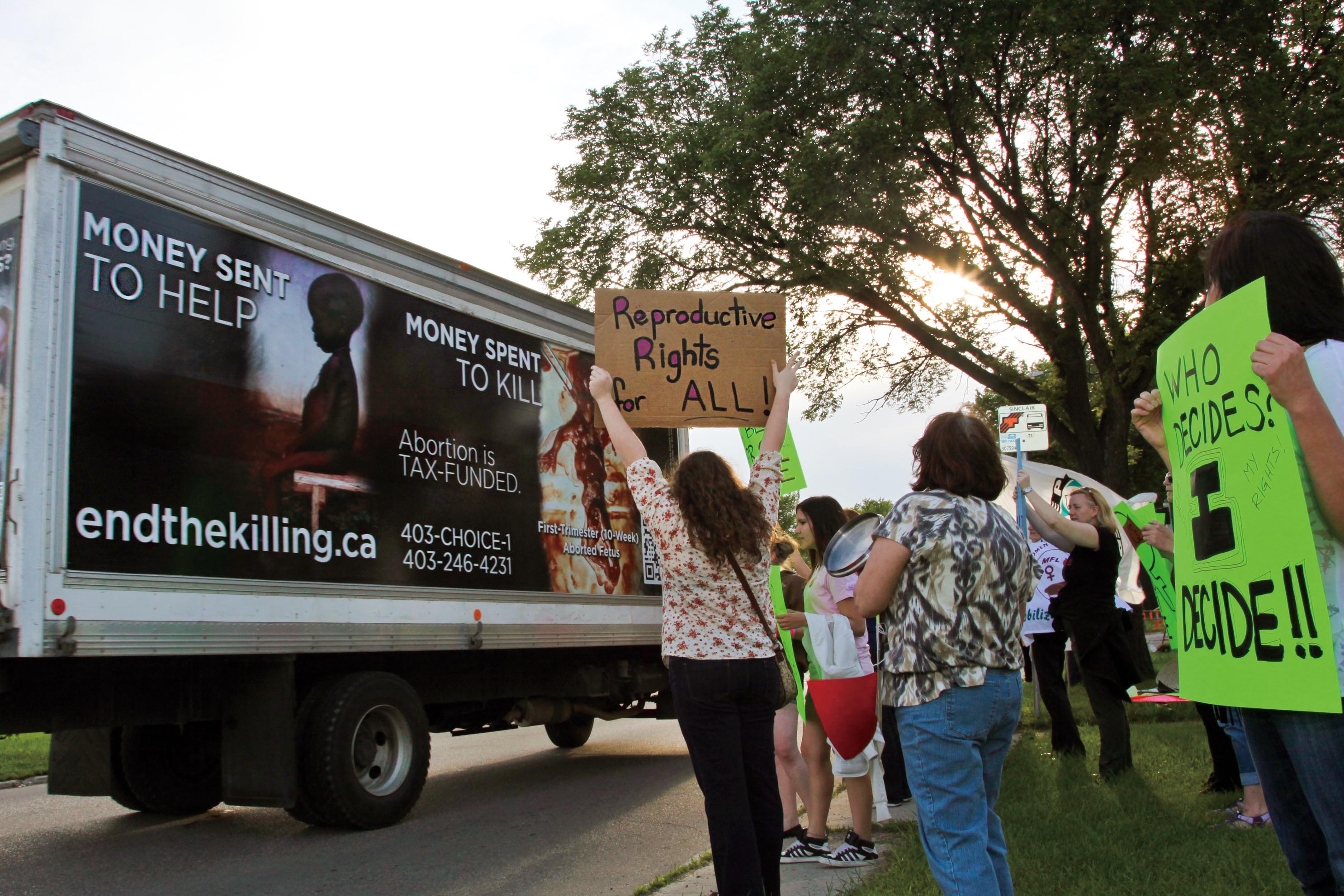 Pro-life trucks covered in graphic images of aborted fetuses circled the street near protesters at the Living Christ Community Church on June 13. The Canadian Centre for Bio-Ethical Reform (CCBR) is touring Canada as a part of a project they have entitled “the new abortion caravan.” The tour aims to end what they believe is the killing of many generations in their lifetime.

The new abortion caravan arrived in Winnipeg to hold a speaking event, basing their message on the graphic images. Stephanie Gray, executive director of the CCBR, explained they are reclaiming the term “abortion caravan” from radical feminists in 1970 that traveled across Canada to repeal abortion laws and obtain free abortions for women.

Gray refers to their movement as the survivor generation rising up 42 years later, declaring that the killing must end.

The CCBR is based in Calgary and intends to expand to Toronto as part of a national plan. They belong to a family of international offices. The new abortion caravan has stopped in many of the major cities in Canada since they began on May 29 in Vancouver.

The CCBR had planned to perform their own protest throughout downtown Winnipeg the following day.

CCBR is not affiliated with any political or religious organization but, rather, focuses on human rights. Their website tour schedule, however, reveals that the majority of their events are held in churches throughout the country.

According to Gray, their focus on human rights was important during their stop in Winnipeg with the new museum of human rights being built. The CCBR claims that unborn children are being denied their basic human right to life.

Gray stated that the protesters outside were the loudest and most boisterous they have encountered on their tour so far. Passing cars often honked and waved in support to the protesters.

Outside the church, approximately 30 women held signs while repeatedly chanting “Whose choice? Our choice!” Signs waved in the air with slogans such as, “laws against abortion kill women.”

Those protesting included members of the University of Manitoba Womyn’s Centre. Coordinator of the Womyn’s Centre Charly Wreggitt explained their distress over the CCBR, stating the fact that it was primarily men who attended this pro-life event was concerning and directly affects women’s freedom of choice.

Wreggit believes that CCBR reclaiming the title of the “abortion caravan” is offensive, as the original title was used to prevent abortions harmful to women. She explains that this pro-life movement will not prevent abortions, but will encourage unsafe and harmful risks through “back-alley abortions.”

Wreggit stated that their protest was important, if only to demonstrate that there are women and allies who do not agree with the CCBR’s movement. She went on to say that it is unclear if a movement like the CCBR’s could affect abortion legislation within Canada. “It’s hard to say […] with a government like ours, it could be a threat.”

Several debates occurred between individuals entering the CCBR event and the protestors on the boulevard. Many ended with one party deciding that the conversation was useless. Gray stated that the CCBR are happy to engage with protestors during these events.

Inside the church, members of the organization shared conversion stories of individuals to the pro-life movement.

The genocide awareness project is a display that the CCBR brings to universities. The project compares the abortion movement to tragedies such as the Holocaust and the Rwandan genocide. Many of the members shared stories of the genocide awareness project, recalling conversations they have had with individuals that resulted with the individual altering their stance on abortion.

Jessica Shaw, an activist within the abortion rights movement, stated that she has conducted research, posing as a woman seeking an abortion, and has received severe judgment from health care providers and crisis pregnancy counselors.

Shaw has attended several events of the CCBR and explained that their speakers are eloquent and educated, using graphic images to “play on people’s emotions.” Shaw argued, however, that the protesters were not offended by the graphic images but by the purpose for these disturbing photographs – to be a mechanism to shame women who receive abortions.

According to Shaw, “the fight for women’s rights doesn’t end today and at this protest. It’s something that we have to do everyday.”