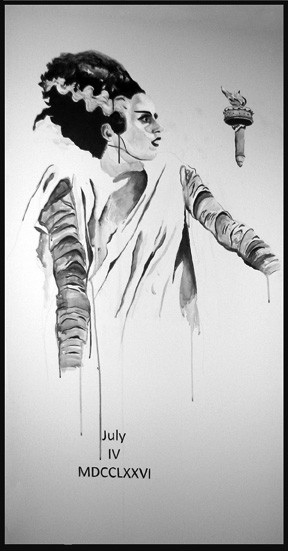 Cameron Cross’s upcoming exhibition, Black and White, aims to answer those questions. Cross’s fascination with black and white imagery is nothing new; his attraction to such basic photography has spanned his entire life. His interest is centred on the invention of the camera and the introduction of the first photographs into society. What was it like for people of that era to be presented with a physical copy of people and places they had previously only heard about? The introduction of photography must have been both overwhelming and wondrous, even in the innovative age of the early 20th century, a premise Cross considers in his work.

“I have long been fascinated with early 20th century images,” reads Cross’s artist’s statement, on the cr8ery website. “Quite suddenly, the camera was invented and still and moving images were brought to the public in black and white. I find the optics of this period of history (approximately 100 years) very fascinating. What happens to our sensibilities when we view images from this black and white era? Most images from this age appear devoid of warmth and emotion, the stuff only colour can bring.”

Essayist Susan Sontag wrote, in On Photography, “To photograph is to appropriate the thing photographed. It means putting one’s self into a certain relation to the world that feels like knowledge, and therefore like power.”

At one time, the world was what it was. Each person saw it through his or her individual perspective, of course, but nobody was able to choose the content of his or her visible world around. The advent of photography meant that we could be selective in what we chose to captureand create the view of the world that we wanted to see. We were freed to construct a biased view of the world, through purposefully chosen images, when the art of photography became available. The ability to choose what we want the world to look like can be easily seen as a kind of power, one which no other species has ever had. Considering the immense social impact of photography, Cross’s fascination with the early forms of the art is no surprise.

Cross’s exhibition presents his take on the beauty and meaning of black and white imagery. As “the extreme versions” of their subjects, black and white photographs possess a level of intimacy that colour photographs do not. Cross’s images present a unique perspective and are alien, symbolic and beautiful all at once. So, once no colour remains, do black and white photographs represent who or what we are at our most basic levels? Or does a black and white photograph simply remind you of another time, one that lives on in history books and in the back of our subconscious? Either way, you can be sure that the image you are looking at does not mean the same to you as it did to the person who created it. What an image means to you is a reflection of who you are at your deepest and most basic levels, whether you realize it or not. Shining a light on this truth, Cameron Cross brings black and white to the forefront of our minds and challenges our perceptions of the world around us.

Black and White by Cameron Cross will open at the Cre8ery art gallery, 125 Adelaide Street, on April 5 and run until April 17.

To Break & To Build

A space to practise revolution

Manyfest: Nine downtown events to finish off your summer