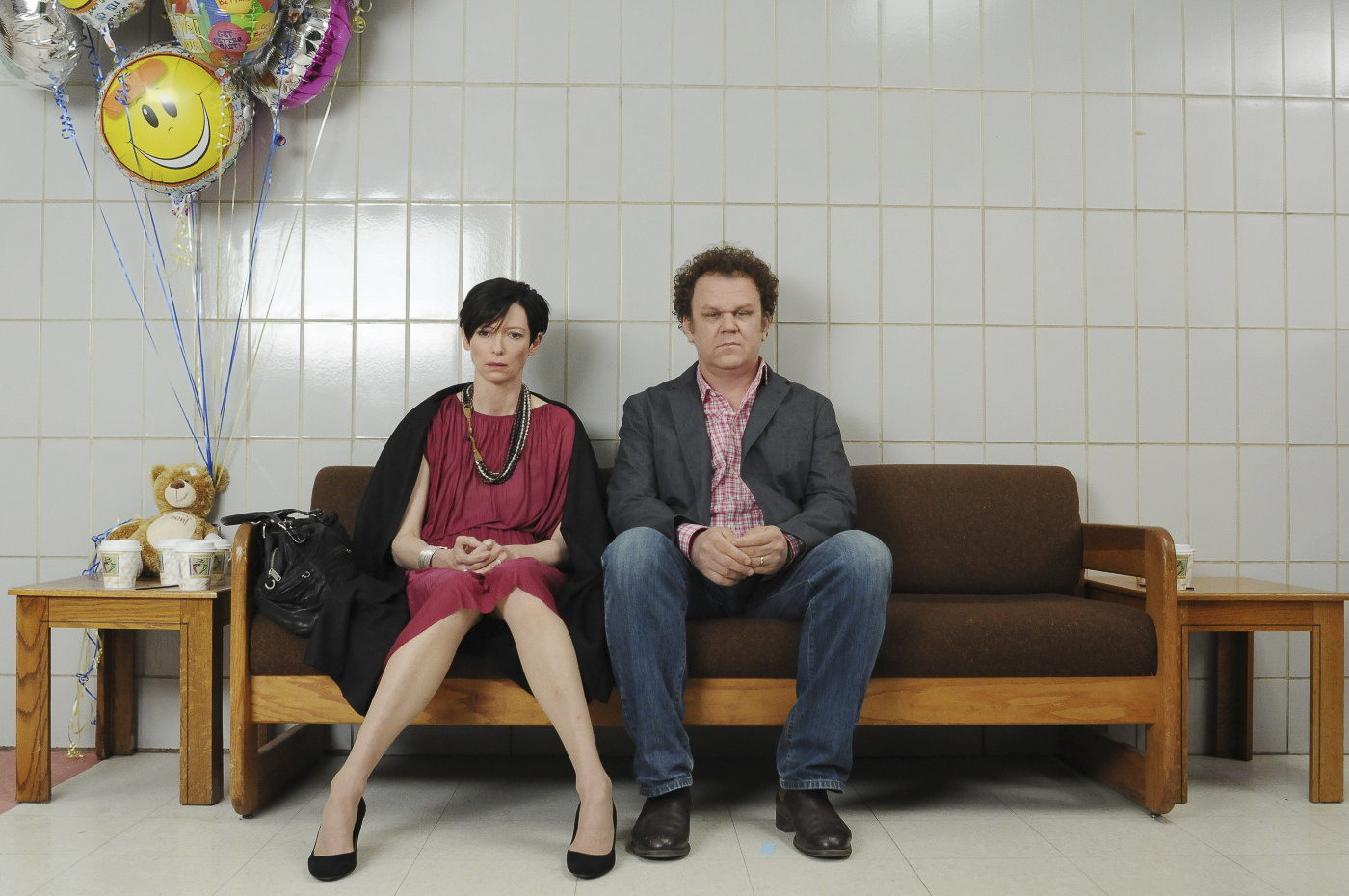 The title of the film We Need to Talk About Kevin is an apt one. Full disclosure from the start: this film is exceptional! People (you, me, critics, every-day-movie-goers) should be talking about it. Unfortunately, there is something about this movie — which I will attempt to articulate — that is really hard to talk about.

This film is centred on Eva Khatchadourian (Tilda Swinton). Swinton plays the mother of an increasingly strange and terrifying child named Kevin. The relationship between mother and son is what drives the plot of this film; Eva was once a travel writer, a bohemian artist who got pregnant and had a child named Kevin.

As an infant Kevin never stopped screaming. If there is any moment where this film opens itself up to laughter, it is in the scene when Eva stands with baby-Kevin in a stroller in front of a construction worker who is jackhammering cement. For a split second, the screaming stops and Eva closes her eyes, her body relaxes and she is still . . . until Kevin’s screams pierce through the blistering noise of the jackhammer and Eva is forced back into her depressing reality.

As a toddler, Kevin refuses to speak. As an older child, he refuses to toilet train. The child actor who plays Kevin at this age, Jasper Newell, is terrifying, bone-chilling almost.

We Need to Talk About Kevin has an interesting narrative structure. The film moves between the past and the present. The present day Eva has suffered some kind of intense, terrible tragedy. The family of four that we know she once had — her children Kevin and Celia, and her husband Frank — are all absent from her life. We quickly deduce that Kevin is in prison and we also learn that the community in which Eva is living despises and abuses her. What we do not know, until the very end of the movie, is what happened that so drastically altered Eva’s life. This is a detail that I will not reveal, because the moment when the blinds are pulled away from your eyes will horrify and captivate you. And to reveal this detail would drastically change the way you experience this film.

We Need to Talk About Kevin is serious, dramatic and thrilling, but above all, it is a horror movie. For most of the film, my hands were pressed to my mouth while I struggled to breathe. There are no pop-outs, there is barely any blood, but this movie is truly, beautifully horrific. All the while, set against a cheery soundtrack made up of Buddy Holly and the Beach Boys.

I left the theatre stunned, as if someone had punched me in the chest; I couldn’t breathe. I felt as if someone had pressed a damp blanket over ears; I couldn’t hear anything. My eyes were glazed with what should have been tears, but weren’t. The way this movie was filmed was surreal. The performances given by both Eva (Swinton) and teenage Kevin (Ezra Miller) are unbelievable.

The weakest piece of this film was John C. Reilly, who played Franklin, the blissfully ignorant father. Reilly’s performance was effective but incomparable to either Swinton’s or Miller’s.

Needless to say, this is not a children’s movie. This is not a romantic movie. It isn’t funny. This movie is intense, slow-paced, scary and serious, and it should not be taken lightly.

We definitely need to talk about Kevin. There are intense moral questions tangled within the centre of this story. Who is to blame when a child commits a terrible crime? What happens when a mother doesn’t know how to love her son? Who do we pity, and why? As I walked out of the theatre, I knew that the circumstances detailed in this film should have brought me to tears. But We Need to Talk About Kevin is a film that won’t tolerate sympathy. It sucks you dry. As I’ve said, this film is exceptional. It takes everything from you as a viewer, and leaves behind nothing but an empty hole in your stomach.

The good, the bad, and the critic