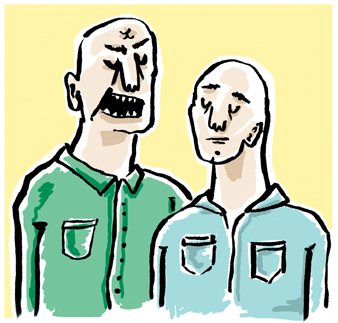 Remember when you were just a little munchkin and your mother said you weren’t allowed to hang-out with the rough and tumble crowd of popular kids, because they’d be “bad for you?” According to a new study, “Negative and competitive social reactions are related to heightened proinflammatory cytokine activity,” conducted by researchers out of the University of California, she may have extended your life.

In the article published on Jan. 23, in the journal Proceedings of the National Academy of Sciences, the researchers outlined an experiment involving 122 healthy university students and employees, wherein positive and negative social interaction was compared against the production of two proteins termed “proinflammatory cytokines” — specifically, Interleukin-6 (IL-6) and Tumour Necrosis Factor Alpha (TNF-α) — responsible for controlling inflammatory responses in the body, in order to help bolster the immune system and repair injured tissues.

Although these proteins exist naturally in the body, and play an important role during immune responses, the researchers note that chronic surpluses in production of IL-6 and TNF- α have, in previous studies, been correlated to high blood pressure, heart disease, depression, diabetes, and cancer.

Subjects were asked to each maintain a diary for eight days, detailing their various social interactions each day, and describing what they considered to have been the most positive, negative, and competitive social interaction of the day. Each participant was scheduled for a laboratory session at the university within four days of the end of that eight-day period. Therein they were subjected to the Trier Social Stress Test — a reliable method of inducing a stress reaction in subjects that involves having them give a poorly prepared speech and performing difficult arithmetic aloud in front of a panel of strangers — and were swabbed, before and after, for an oral fluid sample that was analyzed for cytokine content.

From the subjects’ diaries, the researchers divided the term “competitive event” into three categories, differentiating between leisurely competition such as that found in sports or board games, school and work related stressors, and more intense forms of social competition, such as vying for a sought-after romantic interest. Positive social interactions were generally found to be simply spending time with friends and loved ones, whereas the most common negative social interactions involved fighting and conflict with those close to the subject.

The study is yet another addition to the growing cornucopia of psychological and biological research evidencing the bond between mental and bodily processes. Research into the link between chronic stress and its physical symptoms remains in its early stages.

In light of this new research though, it seems friends and loved ones play a role not only in who we are and how we behave, but also in how we physically endure over the long term. We are witnessing the dawn of a new age of health-planning, where we had best choose to cut out exceptionally stressful relationships the way we’d cut out a Triple Patty Burger ’n Cheese. “[E]xcess Tumour Necrosis Factor Alpha brought on by chronic social malefactors” sounds darn scary.

As the saying may one day go: life is too short to be made shorter by bad friends.