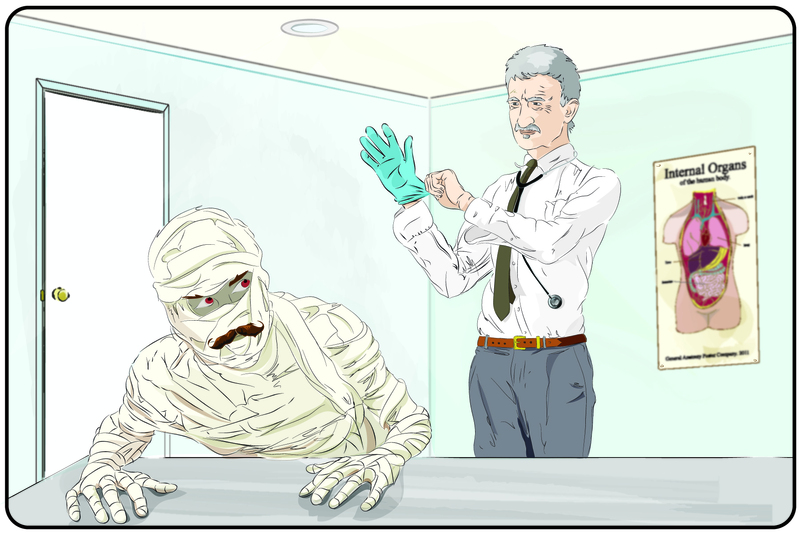 Welcome to Movember, the month-long moustache-growing extravaganza raising awareness and money for men’s health issues — especially prostate cancer. Since its beginning in 2003, the movement has raised US$176 million, and last year alone saw over 440,000 participants.

The U.S. National Cancer Institute estimates that in 2011, 240,890 men will have been diagnosed with prostate cancer and 33,720 will have died, numbers that are very similar to their estimates for breast cancer in women (230,480 cases with 39,520 fatalities). It is the second highest cause of cancer-related death in men. Common symptoms are urinary problems, such as frequent or painful urination, erectile dysfunction, blood in the urine or semen, and recurring pain in the hips, lower back and upper thighs.

Due to its prevalence, and the cost and risk of side effects associated with treatment, prostate cancer is a serious public health issue. Conveniently, it seems to have been a hot topic in recent research, with several studies coming out over the past few months. Here’s a roundup of the latest prostate cancer news.

The United States Preventive Services Task Force — a panel of non-federal health experts whose recommendations are influential — has recommended against prostate-specific antigen (PSA) screening for prostate cancer in men who do not show symptoms. The task force’s draft recommendation, published online in October, concludes that “there is moderate certainty that the harms of PSA-based screening for prostate cancer outweigh the benefits.”

According to the study on which the recommendation is based, screening increases the number of diagnosed cases but has no statistically significant effect on prostate-cancer-related mortality. The study also concludes that PSA screening results in overdiagnosis through false positives. In many cases, it says, cancers are treated that would not be fatal or harmful during a man’s lifetime, and this can cause serious infections, incontinence and erectile dysfunction.

Some scientists and spokespersons for prostate cancer sufferers criticized the recommendation. Eric Klein, of the Cleveland Clinic, said: “I think there’s a substantial amount of evidence from randomized clinical trials that show that among younger men, under 65, screening saves lives.”

The Obama administration will likely be apprehensive about implementing these recommendations, according to the New York Times, for fear Republicans will accuse him of supporting the rationing of healthcare services, as federal legislation requires Medicare to pay for PSA-based testing, regardless of recommendations made by the task force.

In 2001, a team of researchers from the U.S., Canada and Puerto Rico began the Selenium and Vitamin E Cancer Prevention Trial, also known as the SELECT study. They randomly assigned 35,533 healthy men with an average risk of prostate cancer to one of four treatment groups of roughly equal size. One received vitamin E supplements, one received selenium, one was given both treatments, and one a placebo. The four groups were examined every six months until July 5, 2011.

The results showed a statistically significant 17 per cent increase in cancer risk in the vitamin E-only group. Non-significant increases were found in the selenium and selenium-vitamin E groups. No biological explanation for the increase has been proposed, but the study’s authors speculate about a “U-shaped dose response curve,” where too much or too little of a micronutrient is not healthy. The study concludes that consumers must be skeptical of over-the-counter health products containing biologically active substances, such as vitamins.

The oldest case of prostate cancer

Recently, a team of Portuguese researchers used digital X-rays and radiography to take a closer look at a 2,250-year-old Egyptian mummy known as “M1.” M1 dates back to between 285 and 230 BCE, during the Ptolemaic era of Egypt. He was between 51 and 60 years old, and 1.66 metres tall at the time of death.
The images of M1 show large bone lesions on the spine and pelvis, and smaller ones throughout the ribs, scapula, clavicles, and humeral and femoral heads. These lesions are consistent with the patterns of metastatic prostate cancer. According to the research team’s paper in the International Journal of Paleopathology, “cancer seems to have been rare in ancient populations due to a variety of reasons, including a shorter life expectancy and the absence of many carcinogens encountered subsequent to the Industrial Revolution.” However, this study and others “strongly suggest” that prostate cancer was present in the ancient world. M1’s diagnosis may be the oldest known case of prostate cancer.
Movember Canada is a registered charity that funds educational campaigns, prostate cancer research, health policy studies, and support for sufferers of prostate cancer and their families. You can get involved at ca.movember.com.

How plasma is changing the way we treat infections